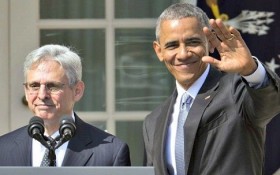 President Barack Obama is considering a scheme — a so-called legal “nuclear option” — to guarantee his nominee is on the Supreme Court. And his plan could work, even if a Republican wins the presidential election in November, according to a source close to the Obama administration.

The 2016 presidential election is supposed to be the ultimate decision on the fate of the High Court. But Obama may join with Senate Democrats in ramming through a judicial activist, no matter how the people vote.

The ex-Obama adviser says a few items would have to fall into place for the court-packing proposal to work.

But if Democrats win the Senate, President Obama would have just enough time to put a liberal justice on the court for a lifetime.

Under the 20th Amendment to the U.S. Constitution, senators are sworn in on January 3rd, but the new president won’t take office until January 20th.

That gives Barack Obama and Senate Democrats 17 days to subvert the will of the people – and according to what a former Obama administration lawyer told NBC News, the president is considering doing just that.

The Democrats need to win five seats to gain control the Senate. Pundits say that would be difficult, but not impossible, this fall.

Once sworn in, the new Democratic Senate can eliminate the filibuster – just like Sen. Harry Reid did to foist Obama’s judges on the nation in 2013 — and confirm Obama’s Supreme Court pick before the new president ever takes the oath of office.

The filibuster requires that the Senate have a super-majority to move forward. Eliminating it would mean that senators could rubber stamp a nominee with 51 votes.

The anonymous Obama official said the Democrats have no problem disregarding the national vote in November. “If Republicans act in a way that jeopardizes Senate seats, then it doesn’t matter who wins the presidential election,” the lawyer said.

Obama has hinted that Democrats could justify the extraordinary move as “tit-for-tat” for the GOP’s “unprecedented” obstruction.

Judge Merrick Garland is considered a moderate liberal. But there’s no guarantee that Garland would be Obama’s final nominee.

Obama might be tempted to substitute a more liberal activist judge after being repudiated in a national election.

That kind of substitution wouldn’t be unusual from left-wing Democrats. They used a similar bait-and-switch process called “reconciliation” to pass ObamaCare in 2010. The Democrat-controlled Congress passed a bill, deleted its text, and substituted the Affordable Care Act in its place.

It would be fitting if Obama ended his presidency the same way.

This plan, revealed by the former Obama confidant, would be the most extreme Hail Mary pass to institutionalize Obama’s form of radical extremism. The administration has softer means at its disposal. As The Horn News reported, Barack Obama could use a Constitutional loophole to force the Senate to consider his Supreme Court nominee – but Republicans wouldn’t have to act in that case.

But for a losing party’s lame duck president to put an activist judge on the Supreme Court for life would be the ultimate liberal dream.