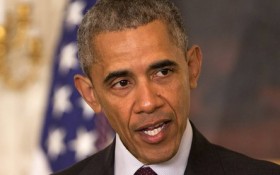 In response, some analysts say that Obama may be setting in motion a plan that could force Congress to act.

And the move may just help him give the Democrats control of the Senate, too — all by exploiting a loophole in the Constitution.

Under a little-known and seldom-used provision of the Constitution, Obama can actually force the Senate to convene against its will and put Garland’s nomination on its agenda.

The president could wait until the Senate goes on vacation, when members want to go back to their home states to campaign for re-election, then demand they return to the Capitol to vote on his judicial nominee.

Article II, Section 3, says the president “may, on extraordinary occasions, convene both Houses [of Congress], or either of them.”

But what constitutes “extraordinary occasions”? The Constitution leaves that up to the president, which is just the kind of broad legal loophole Obama may be looking for.

Lyle Denniston of the nonpartisan SCOTUSblog writes, “It appears that it is within the president’s unchecked discretion (except for a personal sense of not crying wolf unnecessarily) to decide exactly when an occasion is sufficiently ‘extraordinary.’”

The president and his allies in Congress, like Sen. Harry Reid, have said going a full year with an eight-member Supreme Court is “unprecedented,” so there’s no doubt he believes a split Supreme Court rises to the occasion.

Obama’s fringe supporters are already calling on him to take action. The far-left DailyKos website asked its readers, “Please start a petition asking the president to use his Article II Section 3 powers.”

That left-wing blog pointed out another reason Obama might want to do this – and, as usual, it’s blatantly political.

Forcing Republican senators to be in Washington, instead of on the campaign trail, would “handicap them against their opponents” this fall, because they’d be forced to be in session and “couldn’t campaign/raise funds” for their reelection unless they vote for Obama’s nominee.

By most accounts, Republicans will have a hard time holding on to their majority in the Senate this year – and President Obama would love to use any trick he could to flip that chamber.

The last time a president called an extraordinary session of Congress was purely partisan. President Harry Truman announced the session during his acceptance speech at the 1948 Democratic National Convention.

Truman demanded Congress meet that July to pass his liberal agenda, including a national health care plan. Senate Republicans, led by Robert Taft of Ohio, passed nothing. Senator Eugene Millikin said at the time, “This Congress will never rubber stamp left-wing schemes for more spending and more government control of everything in America.”

But Truman was able to campaign against the “do-nothing Congress” and win an election he seemed destined to lose.

If the Senate comes into session, they do not have to grant Obama’s wish and vote on his nominee. They could hold empty, pro forma hearings.

But a special session will create intense pressure on them, give Hillary Clinton a boost in the polls, and make it harder for Republicans to keep the Senate.

And today’s Republicans do not have the same resolve as their forebears of Taft’s day. Even without the threat of an exceptional act from Obama, 17 GOP senators have agreed to meet with Merrick Garland, according to The Hill.