Report: Clinton could be forced from race - The Horn News 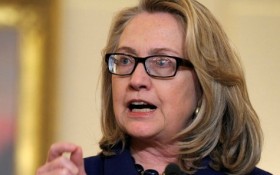 Now, former Speaker of the House John Boehner is saying that voters need to be prepared for a federal indictment to force Clinton from the race completely.

And he believes that would set up Vice President Joe Biden to swoop in and take the Democratic presidential nomination at the Democratic National Convention in Philadelphia.

Boehner says he “would not be surprised at all” if Clinton “has to withdraw” and Biden “parachutes in.” #SALT2016

Boehner made his comments at the SALT Conference in Las Vegas yesterday, a large gathering of leading investors and asset managers.

While it would be an unorthodox political move for Clinton to exit the race, the idea isn’t as far fetched as it initially seems. Clinton’s unfavorable ratings continue to hurt her on the national level, something that has top Democratic strategists expressing serious concern about her electability in November.

If (or when) a federal indictment comes, it would undoubtedly crush Clinton’s already tough general election chances.

While Democratic rival Vermont Sen. Bernie Sanders would be the logical choice for most voters to replace Clinton, Democrat party insiders are fearful of his anti-establishment rhetoric. Others have repeatedly expressed disdain for Sanders disloyalty to the party.

After all, Sanders had previously insisted, “I am not a Democrat, because the Democratic Party does not represent, and has not for many years, the interests of my constituency, which is primarily working families, middle-class people and low-income people.”

For many political analysts, the natural conclusion would be for the Democrats to tag Biden as the Clinton replacement. He is a compromise candidate that polls much more favorably than Clinton nationally, and is highly regarded by Democratic party insiders and voters

In March, political commentator Ann Coulter talked about the same possibility with CBS News when discussing Obama’s potential supreme court nominee. “[James] Comey goes ahead, the FBI Director, because this is egregious, indicts Hillary, but then this has to go to the Attorney General. Valerie Jarrett, who is very close to Obama, is chirping in his ear constantly, puts in a call to Lorretta Lynch, the Attorney General, and says disregard everything the President is about to say publicly.”

Coulter continued, “Obama comes out and says this is outrageous, Hillary did nothing wrong, there should be no indictment, but of course, the Attorney General is independent. Loretta Lynch goes ahead and indicts Hillary. It destroys Hillary’s campaign and gets Biden in and then it’s harder for the Republicans to say we refuse to put Loretta Lynch on the Supreme Court.”

According to The Associated Press, Biden spent months last year immersed in intensive deliberations with his political advisers and his family about whether to run for president a third time. Weighing heavily on his decision was his 46-year-old son Beau Biden’s death from brain cancer in May. In October, Biden announced that time had run out and that he wouldn’t run.

Biden later admitted second-guessing this decision. In January, three months after bowing out of the 2016 competition, the vice president has a few second thoughts about his decision.

“I regret it every day,” Biden said.

This opinion doesn’t seemed to have faded since then. On Wednesday, Biden told “Good Morning America” that, “I planned on running, it’s an awful thing to say, I think I would have been the best president.”

He’s not the only Democrat that thinks so. When asked about a possible Clinton indictment and a fresh face to replace her as the nominee, Rev. Al Sharpton said, “There’s a very fresh face right around the corner in Joe Biden, is that fresh enough for you?”

“He is fresh enough for me,” Sharpton concluded.