Dems confess: Clinton has no chance against Trump - The Horn News 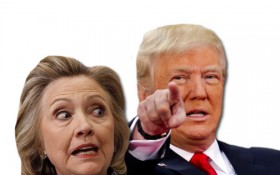 As the Republican and Democratic presidential primaries begin to wrap up, frontrunners Donald Trump and Hillary Clinton have begun to square off.

And the presumptive match-up is terrifying for at least one prominent Democratic strategist.

According to The Daily Caller on Wednesday, “Democratic strategist Dave ‘Mudcat’ Saunders believes Donald Trump will beat Hillary Clinton like a ‘baby seal,’ and that working class whites who haven’t already left the Democratic Party for cultural reasons will do so now for economic ones.”

“I know a ton of Democrats — male, female, black and white — here [in southern Virginia] who are going to vote for Trump. It’s all because of economic reasons. It’s because of his populist message,” Saunders told The Daily Caller Wednesday.

Saunders has been a senior advisor for multiple high level Democrats throughout his career, and co-authored the book Foxes in the Henhouse: How the Republicans Stole the South and the Heartland, and What the Democrats Must Do to Run ’em Out.

He isn’t alone in his opinion. CBS News weighed in with an Op-Ed on Thursday titled, “Yes, Donald Trump can beat Hillary Clinton.”

CBS politics managing editor Will Rahn talked about the possible showdown, asking “What happens when Trump, after Hillary inevitably accuses him of sexism, says that Bill is a rapist, a serial assaulter of women, and that she is his enabler? What happens when he incorporates this into his stump speech? The upside, if you can call it that, to Trump’s refusal to act ‘presidential’ is that he is the only candidate who will go that far. Trump, and Trump alone, is the only candidate who would not only resurrect all the Clinton sex scandals, but make them a centerpiece of his campaign.”

Rahn continues, “And that’s just the sex stuff. The Clintons are no strangers to scandals financial and otherwise, and while bringing up all that baggage, in some cases discredited, would seem too-low for a normal candidate, Trump will almost certainly embrace all of it.”

According to MarketWatch’s Darrell Delamaide, younger voters are flocking to Trump over Clinton as well. “It is Trump who is making the more successful opening to the center, with his support for Medicare and Social Security and his opposition to trade pacts. He, too, could promise some relief for student debt along with his raising hopes of more and better jobs. These young voters aren’t bogged down in the past. They don’t care if someone calls himself a socialist, and they certainly won’t care that Charles Lindbergh was the first to use the expression ‘America First.'”

The polling seems to back this up. While she initially carried a huge lead in a head-to-head match up against Trump, according to a George Washington University Battleground Poll released Monday, Clinton’s national lead has shrunk to a virtual tie.

“In a head-to-head matchup of each party’s frontrunner, Mrs. Clinton leads Mr. Trump by only 3 percentage points nationally (46 to 43; 11 percent undecided).”

“The Republican Party has a strongly favorable political environment for winning the White House,” said pollster Ed Goeas, president and CEO of The Tarrance Group, according to the GWU press release.

“The Democrats are in more trouble than they realize proceeding with their rigged effort to crown Hillary Clinton as their nominee. Who really thinks it’s a good idea to field a candidate with that much baggage and with a 56% unfavorable rating?” Delmaide asked.