Pope, Trump engage in war of words - The Horn News 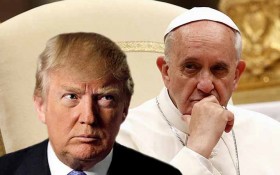 Billionaire Donald Trump and Catholic Pope Francis engaged in a war of words Thursday after the Pope implied Trump wasn’t a Christian. Now, the Pope is learning the hard way not to mess with The Donald.

The exchange started when Pope Francis spoke as he traveled home from a visit to Mexico, and was asked about Trump’s promise to build a wall along the U.S.-Mexican border. Francis said: “A person who thinks only about building walls, wherever they may be, and not building bridges, is not Christian.”

The Pope got his hypocrisy pointed out quickly on social media, when Trump shared a number of photos of the walls that protect the Vatican:

Pope on Trump: “A person who thinks only about building walls…is not Christian.” This is Vatican City. pic.twitter.com/ehmsLoljTl

Thursday, during a campaign stop in Kiawah Island, South Carolina, Trump went on to say that, “If and when the Vatican is attacked by ISIS, which as everyone knows is ISIS’s ultimate trophy, I can promise you that the Pope would have only wished and prayed that Donald Trump would have been president.”

Trump went on to say, “for religious leader to question a person’s faith is disgraceful.”

“No leader, especially a religious leader, should have the right to question another man’s religion or faith,” Trump says.

Trump has promised to build a wall along the Mexican border from Texas to California and expel 11 million people who are in the country illegally if elected president. The Pope’s comments en route home from Mexico came hours after he prayed at the Mexico-U.S. border for people who died trying to reach the United States.

Texas Sen. Ted Cruz, another Republican presidential contender, has also supported building a border wall, and joked that he will make Trump pay for it.

Trump, a Presbyterian, last week criticized Francis’ plans to pray at the border. He said the move was ill-informed and showed Francis to be a political figure being exploited by the Mexican government.

“I don’t think he understands the danger of the open border that we have with Mexico,” Trump said in an interview with Fox News. “I think Mexico got him to do it because they want to keep the border just the way it is. They’re making a fortune, and we’re losing.”