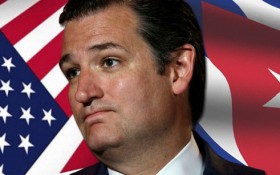 Legal scholars have squared off in public debate on whether Republican Ted Cruz is eligible to become president. Now, the issue is heading to the Cook County Circuit Court in Illinois.

A judge has agreed to hear arguments, starting today, on Cruz’s eligibility to appear on the Illinois ballot.

Even though Cruz is likely to win the legal challenge, experts say the fact that his eligibility will remain doubtful could spell disaster for voter confidence in his candidacy. And in an increasingly tight presidential primary, voter confidence could be the difference in the race for the 2016 GOP nomination.

The question has been in the national spotlight since Republican rival Donald Trump suggested that Cruz, who was born in Canada to an American mother, isn’t legally qualified to be president. And a recent debate at Harvard Law School on Cruz’s eligibility underscored that conflicting interpretations of the U.S. Constitution can produce different answers.

Much of the legal debate weighs whether Cruz is a natural born citizen, a requirement under the Constitution to become president that the document never defines.

Harvard professor Larry Tribe argued in a debate that, based on legal principles from the country’s early history, only those born on U.S. soil can be considered natural born citizens. Granting that status to Cruz, then, “is at odds with the text, the structure and the founding history of the Constitution,” said Tribe, who once taught Cruz as a Harvard law student.

But by the time Cruz was born, newer laws would have made him a U.S. citizen because his mother already had that status, said Jack Balkin, a constitutional law professor at Yale Law School.

Balkin’s argument is hinged on the idea that the newer rules, created by Congress, changed the definition of a natural born citizen. Tribe said Congress doesn’t have that right.

Cruz has previously said it’s already settled that he’s legally eligible, and he called Tribe a “liberal left-wing judicial activist” who supports Democrat Hillary Clinton. Tribe responded by taking a few jabs at his former student, but added that Cruz “was a fun student to have; I enjoyed jousting with him.”

Tribe said he isn’t dismissing the possibility that Cruz could be eligible for the White House, but he insisted that it’s still an open question.

“In no possible sense has the issue been settled, either by the Supreme Court or by political processes or by popular consensus,” Tribe said.

Other scholars have recently taken sides on the question while presidential candidates stump across the country. Cruz and other candidates were in New Hampshire Friday ahead of Tuesday’s first-in-the-nation primary election.

Now, the debate is no longer academic — it hast been taken up by the judicial system. And both professors said it has the potential to end up before the Supreme Court, which would tie the Cruz campaign in a long, dangerous legal battle when they’d rather be focused on battling for votes.