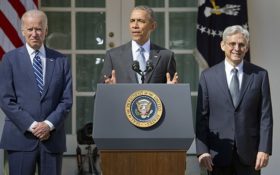 The far-left can’t stop fantasizing about clawing its way back into power – so one of the most elite Ivy League universities is now teaching a course on how to impeach President Donald Trump.

And guess who they got to teach the class? Former President Barack Obama’s old professor and lifelong mentor.

Laurence Tribe, who taught Obama everything he knows about constitutional law, is teaching “Constitutional Law 3.0: The Trump Trajectory” this semester at Harvard Law School.

“This seminar will explore what the Trump presidency might mean for American constitutional law, how we might expect the Constitution to constrain Trump’s execution of his powers and duties, and what #impeachment and removal by other means might resemble in the Trump era,” according to the course description (which includes the hashtag).

But Tribe’s drawn a deep curtain of silence over the rest of the seminar. He only opened the class to 12 students, who had to apply to attend. No outsider is allowed to visit or listen in on the lectures.

Tribe hopes his 12 disciples will continue his quest to overturn any election that brings a Republican to power.

Tribe has been obsessed with blocking Trump from taking office ever since the president’s shocking, underdog victory over former Secretary of State Hillary Clinton.

He and fellow Harvard Law professors tried to convince members of the Electoral College to vote against Trump.

As soon as that failed, Tribe – who advised Al Gore during the 2000 Florida recount and served in Barack Obama’s “Justice” Department – set his sights on impeachment.

Three days after Trump took office, Tribe joined a lawsuit claiming that Trump’s business holdings violate constitutional bans against bribery, known as the Emoluments Clause. By last April the city council in Harvard’s hometown – Cambridge, Massachusetts – approved a resolution saying that the House should impeach Trump over the matter.

But just a month later, Tribe switched up his reason for demanding Trump’s impeachment. He wrote an op-ed in The Washington Post saying, “The time has come for Congress to launch an impeachment investigation of President Trump for obstruction of justice” – for firing former FBI Director James Comey.

Tribe wrote we can’t wait until the facts are in: Congress has to impeach Trump now! “To wait for the results of the multiple investigations underway is to risk tying our nation’s fate to the whims of an authoritarian leader,” he wrote.

Do Harvard Law students really pay $63,800 a year for professors to teach them people should be convicted before they’re proven guilty?

Since then, Tribe has tweeted out every bitter, off-the-wall rumor to ooze its way out of the internet’s lunatic fringe. He accused Trump of giving then-Congressman Jason Chaffetz $10 million in Russian bribe money.

“Tribe has become one of the internet’s most unhinged cranks, churning out wild conspiracy theories and, in the process, becoming a social media star and MSNBC favorite,” wrote liberal journalist Glenn Greenwald.

I’d like to believe that Tribe is doing all this to sell copies of his new book, To End a Presidency: The Power of Impeachment, which comes out in May.

But America’s angry elitists all dream of the day they can deprive the American people of the president they elected:

Trump stuck it to reporters at this month’s Gridiron Dinner, when he joked about not being impeached “yet.”

Turning to impeachment is the political establishment’s way of admitting it can’t win elections anymore. Instead of trying to persuade the American people to adopt their views, Tribe, Waters, Flake, and their ilk want the Deep State to get Trump impeached and thrown out of office. Then they can go back to their cozy arrangement of sharing all the money and power Washington has to offer.

Tribe’s course isn’t education; it’s an Ivy League fantasy, a soap box for his increasingly deranged views, and an attempt to recruit the next generation of Deep State saboteurs.