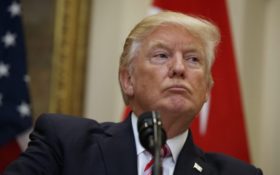 California liberal billionaire, Tom Steyer, has made a vow that he will do whatever it takes to get President Donald Trump impeached.

Steyer has made the promise that he will commit to spending a total of $10 million on advertisements that call for the President’s impeachment.

The billionaire has recently launched advertisements that run on Fox News and other national outlets. The advertisements argue that Trump should be kicked out of the White House and that Trump is pushing the U.S. toward a nuclear war, is obstructing justice at the FBI and threatening to have news stations shut down.

Feeling forced to defend himself against this uneducated lunatic, Trump took to twitter to call Steyer “wacky & totally unhinged.”

Wacky & totally unhinged Tom Steyer, who has been fighting me and my Make America Great Again agenda from beginning, never wins elections!

In retaliation, Steyer has reportedly said that he wants viewers of his advertisements to give a call to their member of Congress and ask them to bring forth articles of impeachment against Trump.