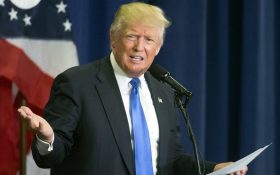 Senior Democrats in Congress, national candidates, and liberal newspaper columnists have been talking about impeaching President Trump since before he was elected. But now, their fantasy has gone beyond talk – they’ve actually taken the first step to throwing Donald Trump out of office.

Last Monday Boyd Roberts, a 2018 Democratic congressional candidate in California, filed paperwork with the FEC establishing the Impeach Trump Leadership PAC. The PAC will try to fire up the left-wing “resistance” and funnel enough money to Democrats – and a few Republicans – in Congress to overturn the election.

The shocking thing is, powerful Democrats in the Beltway are already talking about impeaching Donald Trump, whose popularity recently hit a new high of 55 percent.

In fact, not one, but two members of the House raised the possibility of impeachment within just four days of each other.

“I hope he’s not there for four years,” Rep. Maxine Waters, D-CA, told an interviewer on February 3, before breaking down into a rant against “this man and who he is, the way that he has defined himself, the way that he is acting.”

“My greatest desire is to lead him right into impeachment,” she said.

Waters is a far-left California Democrat. (Is there any other kind?) But one of the party’s up-and-coming young voices made the same case on January 31.

Texas Congressman Joaquin Castro, D-TX, told the media that he had heard President Trump had ordered immigration officials to ignore a court order striking down his ban on “refugees” from terrorist nations. If so, Castro said, “there should be a resolution of censure. And if he does it again, there should be articles of impeachment.”

If Trump does anything other than bow down to an almighty black-robed tyrant, “you’re basically living in a military junta,” said the appropriately-named Castro.

When two politicians say the same thing within a few days, you can bet it’s not a coincidence.

Soon, the media asked if Nancy Pelosi was living in Waters’ world. “When and if he breaks the law,” she said, impeachment “would come up.”

Getting rid of President Trump came up in the mainstream media, too. In the New York Times this Saturday, Nicholas Kristof wrote a column titled, “How Can We Get Rid of Trump?”

Kristof suggested that lawmakers could remove the president from office by invoking Section 4 of the 25th Amendment and branding Trump mentally unfit to serve.

But he said, “unless things get much worse, removal may be a liberal fantasy.” He wants to get Republicans on board by making it look as though Trump is destroying the GOP.

He may well find Republicans willing to sign up for the character assassination.

The way Donald Trump upset the political establishment – surging to power with the kind of real popular support and affection from common people they’ll never have – has left members of both parties unhinged.

“Conservative” columnists Kathleen Parker of The Washington Post and David Brooks of the New York Times have written fantasies about Trump being impeached or removed from office early in his first term.

Chris Suprun, a Republican member of the Electoral College, who voted against Trump, has said that “Trump will likely be impeached within the first year of his presidency by responsible Republicans in Congress.”

And Trump’s enemies include several people with real power.

This isn’t a weird fantasy or political escapism. This is an attempt to subvert democracy, overturn an election, and tear apart our Constitutional system of government. Their search-and-destroy politics would be a better fit in a Third World banana republic like the one they’re trying to create here in the United States.