On Friday, Hillary made a shocking health confession [video] - The Horn News 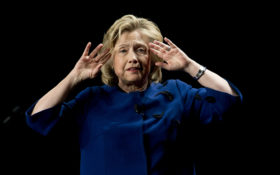 Appearing before the American Federation of Teachers Union on Friday, former Secretary of State Hillary Clinton started her speech in a startling way.

She told the audience that her energy has been down recently, and that she was so tired she could barely stand.

“Well, I’ll tell you — I’ve been back there listening to [Union President Randi Weingarten]… and I’m so exhausted, I can barely stand here,” Hillary told the crowd.

Though only the opening statement to a longer speech, the quote quickly raised eyebrows around Washington, D.C.

For months, Hillary’s apparent struggle to stand and walk on her own has led to wild rumors involving her rapidly deteriorating health.

Hillary’s health was also the subject of intense scrutiny during the 2016 presidential election. Critics claimed she was unable to withstand the physical rigors of the presidency.

The mainstream media dismissed these health questions as a fringe right-wing conspiracy. For example, CNN called the health concerns a sexist plot and said it only “absurd” voters were worried.

Since then, Hillary has become dependent on a large back brace and, at times, crutches to help her stand. She has also been hospitalized a number of times in the past year; once after falling down a flight of stairs, once after falling in the bathtub.

Of course, Hillary’s fatigue didn’t stop her from ranting about oppression and being treated unfairly by sexists on Friday.

“When I was growing up, there were scholarships I couldn’t get, colleges I couldn’t attend, jobs I couldn’t apply for just because I was a girl,” she said during her speech while accepting the Women’s Rights Award from the union.

She also used the public forum to attack Trump voters. “They are trying to rip the heart out of America. They want to turn us into transactional units,” Hillary said, claiming Trump supporters want a “man-eat-man, woman-eat-woman” world.

“They want to turn us against each other. They want to divide and conquer,” she claimed to thunderous applause.

The speeches’ timing is no coincidence, critics say. Insiders are openly speculating that Hillary is readying another presidential bid in 2020.

We’ll see if she can make it that long.

FLASHBACK: Hillary’s health MELTDOWN (pics show she can’t stand on her own!)