Hillary Clinton’s health MELTDOWN (pics show she can’t walk on her own!) - The Horn News 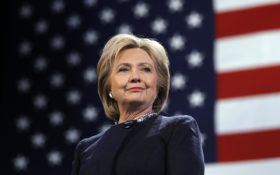 But there’s no denying this picture of her unable to walk, or stand, on her own power after suffering a minor foot injury.

Clinton reportedly broke her toe during her UK book tour to promote “What Happened”.

She said, “I was running down the stairs in heels with a cup of coffee in hand, I was talking over my shoulder and my heel caught and I fell backwards.

However, rumors around the beltway allege Hillary was drunk when she took the tumble…

Hillary herself posed for a photo with fans later in her visit. Notice how her crutches are obviously absent…

If she’s struggling with the physical rigors of a book tour, there’s no way she would have lasted as president.

Maybe she’ll be in a wheelchair by the time she’s indicted!