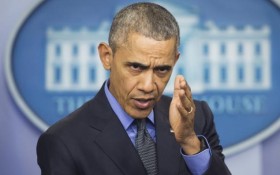 President Barack Obama is talking tough about a new series of executive orders that are designed to curb gun ownership and trample Americans’ Second Amendment rights.

But his latest measures likely don’t have much of a chance of ever surviving a judicial review.

Obama will provide the full details today on a new set of executive actions his administration has been promising for much of his presidency. The orders will expand background checks on guns and target the gun resale market, especially the so-called “gun show loophole.”

But it’s possible that Obama’s gun-control measures might not survive that long.

While presidents have worked to expand the use of executive orders (originally designed to handle administrative tasks) over the years, the law has remained clear on how they can be used.

The United States Supreme Court issued a ruling in Youngstown v. Sawyer more than 60 years ago forbidding presidents from using executive orders to defy the will of Congress. And Congress has repeatedly failed to pass the gun control measures that Obama is now proposing.

So while Obama is on slippery (and likely illegal) ground when his executive orders face judicial review and court challenges, it doesn’t look like the Republican presidential field plans to take any chances.

Florida Sen. Marco Rubio said that on his first day in the Oval Office, “those orders are gone.” Texas Sen. Ted Cruz said that while Obama may currently hold the power of the pen, “my pen has got an eraser.”