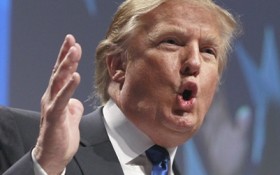 Republican presidential candidate Donald Trump’s latest promise has liberals fuming. While Trump received the endorsement of a New England union that represents police and corrections officers Thursday evening, he announced that, as president, he would call for the death penalty for any person who kills a cop.

The endorsement from the New England Police Benevolent Association comes as Trump remains under scrutiny for his call to ban Muslims from entering the United States “until our country’s representatives can figure out what is going on.”

Executive board members who attended a closed-door meeting to cast their votes said that Trump’s comments had come up briefly in their discussion. But they said that most of the conversation had centered on his past comments in support of police.

“Listen, our message is very clear: It’s what is the next president of the United States going to do to unite this country in an effort to save police officers? Because it’s open season on police officers,” Flynn said before the vote.

“At this point, those of us who are supportive of any party have to look at what is the best interest of our members,” he added.

The union represents nearly 5,000 members from about 200 locals across the region, according to Flynn, but has not received much attention from candidates campaigning in the early-voting state.

Trump, who spoke to gathered members and reporters before and after the endorsement was announced, stressed his support for police officers in his remarks.

“Police forces throughout the country have had a hard time. A lot of people killed,” said Trump, his voice still hoarse with a bout of laryngitis.

He went on to call for the death penalty for any person who kills a cop.

While there is currently a federal death penalty, states have their own laws on capital punishment and governors and legislatures have the authority to decide what those statutes look like independent of a presidential executive order. In states that have the death penalty, killing a police officer is often already considered an aggravating factor in deciding whether a defendant will be eligible for capital punishment.

“You know they’re taking away the military equipment,” said Trump.

“Every time I see a conflict, I see a van pull up, I see an armor-plated Humvee pull up. I see almost a tank in some cases pull up. We’ve got to let our police have the finest equipment and the finest training and if we don’t,” he said, “we’re making a tremendous mistake as a country.”

Trump also acknowledged the backlash Thursday to his proposed Muslim ban, but told those gathered that he’d taken far more heat for his comments about Mexicans criminals entering the country illegally.

“We’ve had a pretty interesting couple of days,” said Trump. “We have people talking. I will tell you that. And we have them talking very positively. Because people are saying, you know, Trump is right.”