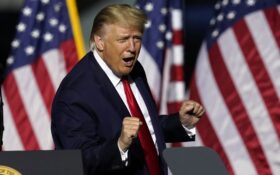 One of the Democrats’ proudest accomplishments over the last presidential term was their two impeachments of President Donald Trump.

Rep. Nancy Pelosi, D-Calif., and the media once gushed that Trump would go down in history as the first president to be impeached twice: once in 2018 for a phone call allegedly demanding a “quid pro quo” from Ukrainian President Volodomyr Zelenskyy and again in 2021 for supposedly inciting an “insurrection” on Jan. 6.

But that may be headed for the dustbin of history, if dozens of conservative Republicans who just took control of the House of Representatives get their way.

Top GOP leadership is considering passing a bill to overturn one or both of Trump’s impeachments, wiping them off the historical record.

“When you find that the final information of the Russia document is all a lie, and we watch what he went through, I would understand why members would want to bring that forward,” McCarthy continued.

Then-Rep. Markwayne Mullin of Oklahoma introduced two bills last year to expunge each of the impeachments—attracting a total of 42 congressional backers.

One of them—Rep. Elise Stefanik, R-N.Y.—now sits in the leadership chair formerly held by Liz Cheney, who voted for the second impeachment. Stefanik threw her support behind a measure to blot out the second impeachment attempt, which tried to humiliate Trump just days before he was set to leave office.

The Horn News has kept you informed about the coalition of Democratic politicians and far-Left donors who began the impeachment ball rolling all the way back in 2016.

The plan to impeach Donald Trump began before he took office, with phony dossier accusing Trump of “Russian collusion.”

House Democrats held a mock impeachment hearing over alleged corruption charges and violating the Constitution’s “Emoluments Clause” in December 2016. That charge originated with a former Hillary Clinton staffer shortly after she blew the 2016 election.

In 2018, left-wing billionaire and failed presidential candidate Tom Steyer spent $40 million on the Need to Impeach campaign… but even radical voters in San Francisco decided not to carry through with a local vote urging their then-congresswoman, Pelosi, to files articles of impeachment.

That came around the same time that the prestigious Harvard Law School hired left-wing legal eagle Laurence Tribe to teach a course on “what #impeachment and removal by other means might resemble in the Trump era.”

He didn’t have to keep the case theoretical; Democrats were already salivating at the chance to file the legislation.

On the night she won her race in 2018, Rep. Rashida Tlaib, D-Mich., told a cheering crowd that she had just promised her son, “We’re gonna go in there, we’re gonna impeach the mother f***er!”

No sooner had Tlaib spoken than the Democrats pounced on a transcript of what later Trump described as a “perfect” call.

During the first impeachment in 2019, House Democrats tapped Norm Eisen to cross-examine Republican witnesses; Eisen’s group, Citizens for Responsibility and Ethics in Washington, received millions of dollars in donations from George Soros.

That impeachment passed the Democrat-controlled House but failed in the evenly divided Senate.

Still, Democrats weren’t ready to give up their impeachment quest—and found themselves cavorting with some pretty strange bedfellows. In early 2019, Roberto de Jesús Escobar Gaviria—whose brother, Pablo, founded the Medellin drug cartel—began a fundraising campaign to scare up $50 million to impeach Trump, whose tough border enforcement made drug smugglers’ jobs much harder.

By October 2019, Trump said it was a “foregone conclusion” that Democrats would try to impeach him again—and he wasn’t disappointed. His nemesis, Rep. Adam Schiff, D-Calif., said in May 2020 that impeachment was an “ongoing” effort.

In 2021, Democrats got their second chance to impeach Trump over the Capitol riots, although Trump had told the rally to act “peacefully” at the Capitol…then he recorded a video asking everyone to go home (which Twitter removed from its platform).

The second impeachment passed the House but fell apart in the Senate, too.

Republicans may want to overturn two attempted miscarriages of justice… but McCarthy (who was never a Trump ally) implied that the bill is not high on his legislative agenda.

“Our first priority is to get our economy back on track, secure our borders, make our streets safe again, give parents the opportunity to have a say in their education, and actually hold government accountable. But I understand why individuals want to do it, and we’d look at it,” he said at last Thursday’s weekly press conference.

He’s not the only one a little skittish about passing the bill. Conservative leader Rep. Dan Bishop, R-N.C., said, “I tend to think we’ve got plenty to focus on looking through the front windshield, rather than the back.”

But another conservative leader said if the Justice Department continues its double standard over the treatment it gave Trump over his possession of classified documents and the way it’s handling President Joe Biden’s hoarding of top-secret materials, the bill just might move forward.

“It wouldn’t surprise me to see if that [expungement] will move forward, especially in light of what’s happening with Biden now,” said Rep. Kevin Hern, R-Okla., the chairman of the influential Republican Study Committee.

If the bill passes even the House, it would threaten to erase the impeachments and leave Pelosi without one of her most cherished “accomplishments”—and Trump wearing a huge smile as he moves into the 2024 presidential race.