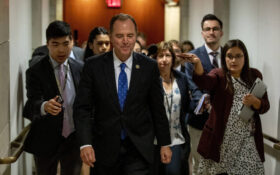 The impeachment trial of President Donald Trump may have ended in February with a decisive acquittal.

Schiff declared the impeachment of Trump would be an “ongoing” effort.

And newly published documents show libera lawmakers may revive the Trump impeachment before 2021 inauguration — and Schiff only needs one thing to make it happen.

Schiff announced the plans in a letter to the Supreme Court.

Multiple sources are confirming that Democrats requested Robert Mueller’s grand jury materials from Attorney General William Barr and the Department of Justice in an attempt to continue ongoing investigations into the Trump administration.

But Barr, upholding the rule of federal law, denied access to the Democrats.

In turn, liberal lawmakers complained and took their case to the Supreme Court.

The grand jury materials have been put on hold by Chief Justice Roberts while the Supreme Court reviews the request.

Based on the language used in the official court documents, liberal legislators complained about the timing of grand jury documents, fearing they might not be able to impeach the President again before the current congressional term ends.

The following excerpt of the filing reads:

If DOJ’s request for a stay is granted, DOJ need not file its certiorari petition until August 2020, and therefore this Court likely would not determine whether to grant or deny that petition until at least October 2020. This substantial delay will seriously endanger the Committee’s ability to complete its impeachment investigation during the current Congress— which ends not long thereafter on January 3, 2021.

The document is telling on many fronts.

Perhaps Democrats may be nervous that the party’s House majority may be up for danger following November elections –– and therefore rushing to get a “last chance” impeachment before the buzzer.