Maxine Waters stabs Nancy Pelosi in the back - The Horn News 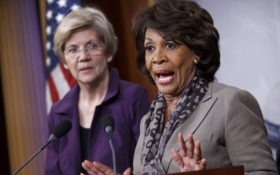 President Donald Trump’s popularity is on the rise, and the Democratic party seems to be growing more desperate.

So desperate, in fact, that liberal leadership has turned on each other.

Just days later, Waters was slapped with assault charges after she allegedly hit a conservative reporter.

Waters behavior has become so unhinged, her own party leaders have been struggling to reign her in. Her calls to violence were condemned by both House Minority Leader Nancy Pelosi and Senate Minority Leader Chuck Schumer, who called her “un-American.”

So how did Waters react?

Instead of apologizing and spending a few days on self-reflection, Waters doubled-down. On MSNBC, she attacked her own party’s leadership for being self-serving and willing “to do anything” to stay in power.

Inside the high stakes political theater in Washington, D.C., a public condemnation of one’s own party leadership like this is the political equivalent of spitting in the face of your coworker.

Trump’s successes have Democrats growing more desperate daily. The so-called “Trump Derangement Syndrome” has become so unhinged, liberals are starting to rip each other apart.