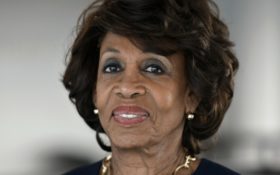 California Rep. Maxine Waters is a rising star among the Left. Since President Donald Trump was elected in 2016, Waters has been a leading voice of the so-called “resistance” movement.

On Saturday, though, Waters crossed a line — and critics say she committed a felony.

Appearing at a charity toy drive, Waters grabbed a microphone and instructed her followers to attack and harass Trump administration officials everywhere they went.

“We want history to record that we stood up. That we pushed back,” Waters told an angry crowd. “That we fought. That we did not consider ourselves victims of this president. History will record that while he tried to step on all of us, we kicked him in his rear and we stepped on him.”

“The message has to be, ‘Mr. President, we’re not afraid of you,” Waters said. “If you think we’re rallying now, you ain’t seen nothin’ yet.”

“If you see anyone from [the Trump administration] in a restaurant, in a department store, at a gasoline station — you get out and you create a crowd,” Waters later told her supporters. “And you push them, and you tell them they’re not welcome. Anyone. Anywhere.”

Waters doubled down on her violent rhetoric during an appearance on  MSNBC later that day.

“I want to tell you, these members of his cabinet who remain and try to defend [Trump]: They won’t be able to go to a restaurant. They won’t be able to stop at a gas station. They’re not going to be able to shop at a department store,” Waters said. “The people are going to turn on them. They’re going to protest. They’re absolutely going to harass them until they decide that they’re going to tell the president, ‘No, I can’t hang with you.’ This is wrong. This is unconscionable. We can’t keep doing this to children.'”

Conservative commentator Bill Mitchell said Waters was effectively inciting a riot, and called for her arrest.

Inciting a riot is a federal felony, punishable by up to five years in prison.

You can see video of the angry address here —