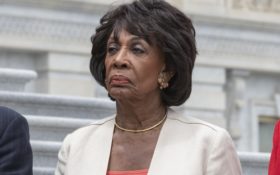 California Rep. Maxine Waters is not having a good week. Just two days after critics accused Waters of committing a felony for inciting a riot, the liberal leader is back in the news.

Assault charges were filed in Washington, D.C. against Waters after the California Democrat allegedly assaulted a conservative reporter for asking questions about the violent comments.

Reporter Laura Loomer of Big League Politics wrote she’d reported assault charges to the Capitol police after “Ms. Waters assaulted me 3 times. She hit my hand to try to knock my phone out of my hand, and then she hit me in the face with her papers twice.”

At one point in the footage, Waters seems to shove Loomer’s camera and demand she “be civil” with her questions. Eventually, Waters runs away and hides behind her staff.

Maxine Waters doesn't like it when she's harassed, just like she suggested people do to Trump supporters.

Rep. Maxine Waters just shoved me and angrily stormed off as I asked her questions. (Not a violent shove but she initiated physical contact)

Then, that same congressman has charges filed against them in Washington, D.C. for assaulting a mainstream media reporter!?

It would be the front page of The Washington Post and Time Magazine.

“Women shoving back” would be the subject of every single Hollywood award speech.

CNN and MSNBC would each devote special week-long coverage to the violence that had taken over the Republican party.

But because it’s Maxine Waters — not a conservative Republican — all is forgiven?

Well, not this time.

Yet another ugly mark on Maxine Waters’ disreputable career.