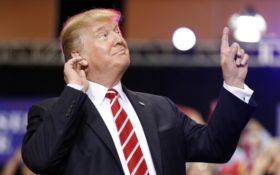 The president has been very busy the past month — and America has responded. The media calls him a horrible, unworthy president… but he has reached a new high among Hispanic voters with a 10 percent increase. Even liberal pollsters have noted that his approval ratings rose among both Republicans and Democrats, too.

These risings numbers come as no sudden shock following the success of the summit meeting with North Korean leader Kim Jong Un and a strong economy.

According to a new Harvard CAPS/Harris poll, three-quarters of Americans backed Trump’s decision to meet with Kim and fifty-nine percent approve of the way he is handling his relationship with the dictator.

There has been no change in the way approval that Americans feel about Trump’s work on stimulating jobs and handling the economy, while fighting terrorism — his poll results appears the same from last month’s poll.

As can be expected, Trump has not lost his strong support from Republicans.

According to Gallup data, “The only modern Republican president more popular with his party than Mr. Trump at this point in his first term, according to Gallup, was George W. Bush after the country united in the wake of the Sept. 11 attacks.”

The mainstream media may not like to admit it — but Trump is becoming more popular as America is becoming great again.

With these high of ratings, we can only hope that they will lead to another win in 2020 for Trump.