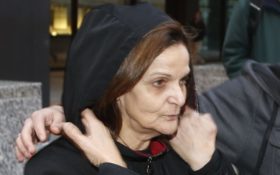 The organizers and speakers in charge of the Women’s March in Washington, D.C. in January was a who’s who of liberal whack-jobs.

For example, one of the key note speakers, Donna Hylton, once kidnapped, tortured and murdered a gay man (no, really).

Another, Linda Sarsour, was exposed for having deep ties to Islamic terror organizations.

Trump supporters cried foul and said these speakers and organizers weren’t patriotic Americans, but instead were looking to cause trouble.

Turns out, they were right. Friday, one of the organizers of these leftist causes was stripped of her U.S. citizenship and,  following a plea hearing on Apr. 25th, will be deported from the country for lying to immigration officials about her role in a radical Islamic terror group.

Prosecutors said Rasmea Yousef Odeh — who was also the mastermind behind the failed “Day without Women” protest — had lied and covered up her past terror conviction twice when she applied for U.S. citizenship.

She will avoid jail time as part of the plea deal, which will see her deported back to her native country of Jordan.

Odeh had previously confessed to a role in the murder of two Jewish men — Leon Kaner, 21, and Edward Jaffe, 22 — when she was a member of the Popular Front for the Liberation of Palestine (PFLP), a terrorist organization.

“The story began on Friday, February 21, 1969 when two unsuspecting Israeli university students, Leon Kaner, 21, and Edward Jaffe, 22, stopped at a Jerusalem supermarket to pick up some last minute provisions for a hike the two were planning to take,” according to Frontpage Magazine. “They never made it and were blown to bits by a bomb placed in coffee cans on a shelf. Nine others were injured in the blast. Jaffe and Kaner, as well as the nine injured civilians, were targeted for no other reason other than the fact that they were Jews with the temerity to live in their ancestral land.”

She served ten years in jail for the murders, a fact she hid from immigration officials as part of her “vetting” process that let her enter and live in the United States in 1994.

She lied again when she gained her U.S. citizenship in 2004, and was facing ten years in prison for the crime before striking the plea deal.

These radicals are the kinds of people Democrats and liberals look up to, it seems.