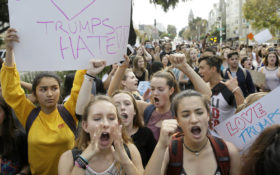 Saturday’s “Women’s March on Washington, D.C.” was a controversial affair. There has been discrepancies in attendance totals, criticisms on the huge trash heap left behind, and outrage after one celebrity speaker called for the murder of the United States President.

Lost in the shuffle was the disturbing history of one of their “human rights” speakers – specifically, prison reform activist Donna Hylton, who says she was unfairly treated while incarcerated for 27 years.

What no one has mentioned was WHY Hylton was imprisoned.

The Horn News did some digging… and what we discovered will shock you.

At no point in her advocacy does she mention the name of her victim. On her website, her admission to her crimes is simply:

My name is Donna Hylton but for twenty-seven years I was known as Inmate #86G0206.

In 1986 I was sentenced to 25 years-to-life for kidnapping and second-degree murder. I served the time at Bedford Hills Correctional Facility, the only maximum-security prison for women in New York State, and was released in 2012.

Vigliarole believed the [Hylton and her accomplices] were prostitutes who were going to have sex with him. Instead, they picked him up on March 8 in Elmhurst, Queens, at Maria [Talag]’s home, and drugged him to make him drowsy. Then they drove him to Selma [Price]’s apartment in Harlem. The apartment had already been prepared for an extended torture session: The closet door had been cut, a pot put in it for use as a toilet, the windows boarded.

Vigliarole was set-up by Louis Miranda; the two had allegedly partnered on a graft and the payout had gone south. Miranda and his accomplices, Selma and Maria, had offered Donna Hylton and her two friends, Rita and Theresa, $9,000 each for helping kidnap and murder Vigliorole. When they were done, they locked Vigliorle’s decomposing body in a footlocker.

Donna had planned to use to pay for a picture portfolio to start a modeling career.

What they did is disturbing to read —

For the next 15 to 20 days (police aren’t sure just when Vigliarole died), the man was starved, burned, beaten, and tortured. (Even 10 years later, [New York City Detective William] Spurling could recall Rita’s chilling response when they questioned her about shoving a three-foot metal bar up Vigliarole’s rear: ‘He was a homo anyway.’ How did she know? ‘When I stuck the bar up his rectum he wiggled.’)
…

The three girls took turns watching the man. It was Donna who delivered a ransom note and tape to a friend of Vigliarole’s, who was able to get a partial license plate number of the car she was driving. He notified the police, who traced the plate to a rental car facility. On April 6 the suspects were arrested, and detectives spent 36 hours straight interviewing the seven men and women. ‘We had to keep going back and forth and catch them in lies,’ said Spurling. ‘It was a never-ending circle of lies.’
…

Spurling himself interviewed Donna: ‘I couldn’t believe this girl who was so intelligent and nice-looking could be so unemotional about what she was telling me she and her friends had done. They’d squeezed the victim’s testicles with a pair of pliers, beat him, burned him. Actually, I thought the judge’s sentence was lenient. Once a jailbird, always a jailbird.’

I wonder what people would think if, while they listened to Donna Hylton talk about the injustice she faced, they also knew she was once paid to help drug a stranger and lock him in a specially-prepared torture room for two weeks before stuffing his dead body in a footlocker to decompose?

I wonder what people would think if they know this “human rights” advocate was an active participant in the starving, burning, beating, and savage murder of a 62-year-old balding real estate broker for $9,000?

REPORT: Why Hillary doesn’t care that she lost the election [sponsored]

Hylton served a 27-year prison sentence for her heinous crimes.

Since her release, Hylton has become an outspoken advocate of prison reform, and claims the justice system mistreated her because she was a woman.

Saturday, she was a key note speaker at the Women’s March, and was cheered as a hero by hundreds of thousands of liberals.

One must wonder – does Hylton hear her victim’s screams anymore, or just her liberal fan’s cheers?