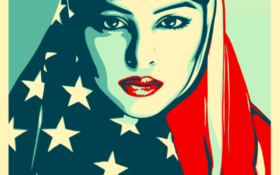 Last week’s Women’s March on Washington was an interesting affair.

Hundreds of thousands of protesters wore costumes too raunchy and biologically explicit to describe, but the advertisements for the March prominently featured another, more controversial garment: the Muslim headscarf.

One of three posters advertising the event – created by the same man who painted the Obama “Hope” poster, Shepard Fairey – shows a Muslim woman wearing an American flag as a hijab with the words, “We the People are greater than fear.”

Incredibly, the March’s organizers portrayed the hijab as a symbol of freedom and liberation, for women and Americans.

There is nothing further from the truth.

The idea of wearing the Muslim headscarf as an anti-Trump protest came from B-list actress Kathy Najimy – the voice of Peggy on “King of the Hill” – in her words “to proclaim our commitment to freedom of religion.”

What she failed to mention is that no one has freedom of religion in fundamentalist Muslim societies. Churches are not allowed to be built in Saudi Arabia, and women must wear the hijab or pay – sometimes with their lives.

Think the hijab is about freedom? Just remember the 15 young girls who were forced back into a burning school in Mecca, because they weren’t wearing Islamic head coverings.

The Saudi Arabian religious police (with the Orwellian name the Committee for the Promotion of Virtue and the Prevention of Vices) physically blocked the girls from escaping the flames, so they would not corrupt men by the sight of their hair and faces.

That’s just the tip of the spear.

Everywhere Muslims are in the world, women are ruled with domination and fear – and the headscarf is a symbol of their repression.

ISIS stoned five women to death for refusing to wear the hijab in Iraq in 2015. Women who refuse to wear the headscarf have been strangled, beaten, and murdered, sometimes by their own family members.

The women don’t even have to be Muslim.

A Christian woman, Amina Muse Ali, was killed in Somalia for refusing to wear a headscarf.

Teachers of all faiths at the College of South Australia were given the option to wear the headscarf or lose their jobs.

The feminists didn’t protest any of that during the so-called “Women’s March”, of course.

Instead, they picked up the idea of wearing the hijab at the urging of one of its organizers – Linda Sarsour, who has deep ties to radical Islam.

Her group, the Arab American Association of New York, condemns America for “Islamophobia” after every terrorist attack. Her cousin and brother-in-law have served time in Israeli prisons for recruiting or aiding terrorists, including Hamas. And her husband praised Palestinian terrorist organizations

Sarsour even tweeted that the Underwear Bomber – a Nigerian who hoped to set off a bomb on a plane bound for Detroit on Christmas Day – wasn’t an example of Muslim terrorism but an attempt by America to bomb itself.

She once wrote that America living under Islamic Shari’a law “sounds nice, doesn’t it?”

The sight of so many signs and hijab-clad women frightened those who know Islam first-hand.

Cheri Berens, an American who lived in Cairo while working for the Egyptian government, said she saw Muslim women desperately trying to avoid wearing the headscarf.

The biggest beneficiary of the Women’s March, she said, is the Muslim Brotherhood, the terrorist group that trained Osama bin Laden in Islam. It’s a sight that likely had radical Islamic terrorists cheering.

It only means you’re conquered.

Shame on the women who tried to train American feminists to submit.

By carrying these signs, these protestors weren’t speaking out for international women’s rights.

They were speaking out AGAINST women’s rights.

That’s not the American way.