INSANE! Hillary wants to be Facebook CEO!? - The Horn News 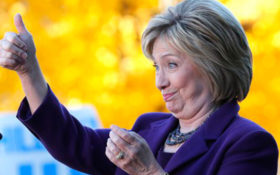 Since her stunning loss to President Donald Trump in the 2016 election, former Secretary of State Hillary Clinton hasn’t faded into the background gracefully.

It’s tradition for the losers of a presidential election to fade graciously out of public view, so they can let their former opponent govern.

Hillary is not that normal, it seems. Rumors have swirled of drunken meltdowns, secret health scandals, and a string of other political controversies have followed in Hillary’s wake since her 2016 loss.

Now she wants back in power… but not in the political arena, where she would face voters wrath again.

Despite having zero tech background (besides the ability to “wipe” email servers, of course) Hillary says she wants to control of one of the most powerful media companies in the world.

Hillary told a stunned crowd at Harvard last Friday that she wants to be CEO of Facebook.

“Speaking at Harvard University before receiving an award Friday, Clinton was asked a hypothetical. … If Clinton could be chief executive of any company right now, which company would she choose? ‘Facebook,’ Clinton said without hesitating,” The Los Angeles Times reported.

“Clinton said that she’d want to be in charge of the social media giant because of the immense power it has over the world’s flow of information,” The Times continued. “‘It’s the biggest news platform in the world … but most people in our country get their news, true or not, from Facebook.”

Would you want Hillary to be your boss?

Lead Clinton investigator shot in the back twice, run over