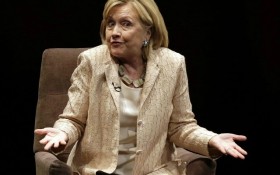 There’s a reason even many of Hillary Clinton’s biggest supporters don’t fully trust her. They worry she will say just about anything to get elected. And evidence says, they’re right.

She calls her ever-shifting views a sign she is “evolving,” but others would call it something else entirely.

“You wonder if it is a pivot or whether she is saying what the moment demands,” liberal activist Sally Kohn told CNN.

Even kids, who are normally more trusting, see right through her.

“I feel like she’s trying to appeal to young women and liberals but it doesn’t seem like she genuinely cares about the issues she says she cares about,” teen activist and blogger Alexis Isabel Moncada told The Daily Beast. “She changes her ideals a lot.”

Here’s how Clinton has changed her views on five issues that will play a key role in the 2016 presidential race:

If there is a position to be held on immigration, odds are she has held it at some point or another.

Her position was so firm that a conservative commentator called her remarks “Pat Buchanan-esque.”

Even as recently as 2014 she said the unaccompanied children crossing the border should be “sent back.”

Now, this popular issue in the 2016 presidential election has seen Clinton apologize for even using the word “illegal” to describe clearly illegal activity, come out in favor of giving them access to Obamacare, and claim she even wants to offer a “path to citizenship.”

You might say she was for it before she was against it.

Back in 2008, Secretary of State Hillary Clinton called the TPP “the gold standard” of trade deals.

Today, as Bernie Sanders picks up working-class supporters who oppose TPP because it will send American jobs overseas, Clinton came out against the deal and even tried her hand at revisionist history.

She has insisted several times that she said she “hoped” it would be the gold standard.

But that’s a lie.

“This TPP sets the gold standard in trade agreements to open free, transparent, fair trade, the kind of environment that has the rule of law and a level playing field,” is the actual quote.

Some of the biggest Washington battles in recent years have been on raising the debt ceiling.

When Republicans demanded a little fiscal responsibility before passing even more debt down to future generations, Clinton noisily accused them of being obstructionists and said raising that limit is just “common sense.”

But as senator during the presidency of George W. Bush, she voted repeatedly against raising the debt ceiling.

“Raising this debt limit while embracing policies that further exacerbate the deficit is in essence a ‘children’s tax,’ a burden borne not by this Administration or this Congress, but by our sons, our daughters and our grandchildren,” she said during one of those occasions. “It is for these reasons that I oppose this increase in the debt limit.”

Well, which one is it?

This one isn’t just a flip-flop. It’s an impressive flip-flop-flip. Clinton supported strict gun control as first lady and as a senator from New York, calling on the Feds to enact a national gun licensing and registration program.

When she ran for president in 2008, then-Senator Barack Obama campaigned on a platform of strict gun control – so Clinton ran quickly to the other side of the issue, saying the federal government shouldn’t impose “blanket rules.”

Today, she has come full circle, and like rival Sanders is pushing again for stricter gun control and universal background checks.

It may be hard to believe today, but Hillary Clinton was once a passionate defender of traditional marriage… or so it seemed.

“I believe marriage is not a bond, but a sacred bond between a man and a woman,” she said in 2004 while promising to stand up for “the sanctity of marriage” as senator from New York.

Clinton said marriage “exists between a man and a woman going back into the mists of history as one of the foundational institutions of history and humanity and civilization – and that its primary, principal role during those millennia has been the raising and socializing of children for the society into which they are to become adults.”

Today, of course, she is all for gay marriage.

Given a shift in the political winds, Clinton’s convictions will shift whichever way the votes push her.

With Clinton, only one thing is really certain — that she’ll say whatever she has to say to get elected in 2016.