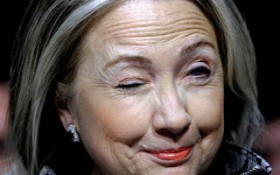 By the time we learn what’s really contained in thousands of Hillary Clinton emails that have been withheld from the public, voters in Iowa, New Hampshire, Nevada and South Carolina will have already cast their ballots.

And it doesn’t look like this is any accident.

Long criticized for their cozy relationship with Clinton, the State Department raised eyebrows Friday when it asked a federal court for a one-month extension to publish the last of Clinton’s emails from her tenure as Secretary of State.

That would push the release from January 29, which the State Department claims it can’t meet, until February 29 — after the crucial Iowa caucus and New Hampshire, Nevada and South Carolina primaries.

Critics are furious over the timing of the delay, and some opponents are speculating that it’s a calculated political move by the State Department to protect Clinton and her struggling presidential campaign from further damage and embarrassment ahead of the primaries.

Just two weeks ago, the State Department’s inspector general issued a scathing report accusing the agency of providing inadequate and inaccurate responses to Freedom of Information Act requests, including those concerning Clinton’s emails.

State Department spokesman Mark Toner said the department wouldn’t be able to meet its court-mandated goal of Jan. 29 because it sill needs to review more than 9,000 pages of documents. The department even tried to blame the recent snowstorm in Washington, DC for the delay.

But the last release of Clinton’s emails, pulled from her private, “home brew” server, led to revelations that some of her communications were considered beyond top secret and included information on so-called special access programs. Such programs suggest the emails could reveal details about intelligence sources.

And that’s left some wondering what might be included in this last batch of emails the State Departments seems to be in no hurry to release.

The issue has nagged at Clinton’s presidential campaign, and polls continue to show she has a major trust problem with voters.

Clinton, the Democratic front-runner for the 2016 nomination, exclusively used a private email account and a home server during her time in government. She said this was a decision made out of convenience and has denied doing anything wrong, but the FBI is reportedly investigating whether she mishandled classified information in a manner that may be criminal.