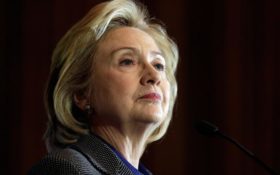 Just one day after angry, howling mobs banged on the door of the Supreme Court to try and stop Justice Brett Kavanaugh’s confirmation, Hillary told CNN’s Christiane Amanpour that it’s time for Democrats to take the gloves off.

The time for talk, Hillary said, is over until Democrats seize control.

“You cannot be civil with a political party that wants to destroy what you stand for, what you care about,” Hillary said. “That’s why I believe if we are fortunate enough to win back the House and or the Senate, that’s when civility can start again.”

“But until then, the only thing the Republicans seem to recognize and respect is strength.”

It follows an escalating trend of violent actions from liberal activists since President Donald Trump’s inauguration in 2016.

Virginia Sen. Tim Kaine, Hillary Clinton’s Vice Presidential nominee, told liberals they should “fight in the streets” after riots broke out at the president’s inauguration ceremony. His son was arrested for participating in a violent anti-Trump demonstration shortly thereafter.

In 2017, Florida Rep. Val Demings called the alt-left riots in Berkley, California a “beautiful sight” that could be a “major tool” for Democrats in the future

Rep. Maxine Waters told supporters in July it was their duty to form mobs and confront Republican lawmakers in public — just one year after a violent alt-left radical shot House Majority Whip Steve Scalise in an assassination attempt.

The left is getting increasingly unhinged and violent — and Hillary is asking for more.

Hillary Clinton rejects calls for civility: "You cannot be civil with a political party that wants to destroy what you stand for."pic.twitter.com/HSVKxReVUI