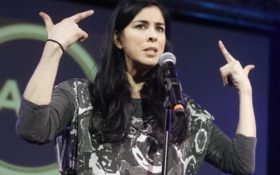 Listen closely, and you can hear it – secret “dog whistles” are being increasingly used by high-profile liberals.

And their coded word usage is calling for violence.

Democratic lawmakers and left-wing celebrities alike are communicating to millions of Americans every day… and what they’re hinting at is shocking.

It sounds far-fetched, but it’s very real. Recently, comedian Sarah Silverman took to Twitter to demand a military overthrow of the U.S. government, and was predictably bashed by conservatives for it.

WAKE UP & JOIN THE RESISTANCE. ONCE THE MILITARY IS W US FASCISTS GET OVERTHROWN. MAD KING & HIS HANDLERS GO BYE BYE❤❤❤❤ https://t.co/Y2WZbL012A

But there’s a problem that’s being ignored. Silverman is not alone.

Whether intentional or not, the rhetoric being employed by the left is becoming increasingly militant by the day.

At the Screen Actors Guild ceremony Sunday, broadcast to millions of viewers, actor David Harbour issued a “call to arms” for viewers to “hunt monsters” and “punch people in the face” who are not deemed inclusive enough.

Whoopi Goldberg equated President Donald Trump and his supporters to Islamic terrorists this week in the middle of her popular talk show. And in front of a massive television audience on January 21st, aging pop star Madonna called for people to “blow up” the White House and assassinate Trump.

Even worse, it’s not just celebrities that are guilty of using these reckless dog whistles, either. On Tuesday, Virginia Sen. Tim Kaine called on liberals to “fight in the streets” against Trump and his supporters during an appearance on MSNBC.

On Wednesday at a House committee meeting, Florida Rep. Val Demings called the violence in Berkley, California this week “a beautiful site” and asked about the rioters, “what direction and instructions and how can we have a more organized effort so that they can be a major tool in moving our agenda forward?”

And people are listening.

We won this night. We will control the streets. We will liberate the land. We will fight fascists. We will dismantle the state. This is war. pic.twitter.com/JnlJMUtgCj

That’s the “beautiful sight” to Demings?

The reality is this: the language being used by liberals recently isn’t just biased and uninformed.

It has become dangerously violent and very specific.

High-profile liberals are demanding violence and revolution and assassinations at an alarming rate.

Like them or not, these are famous people whose words have power.

They’re using these words to encourage radicalization – and people are obeying.

Don’t believe it? Watch this shocking video compilation of unprovoked, vicious attacks against Trump supporters from the past year. Warning: This is very upsetting.

The first amendment is a wonderful thing, but it’s time we recognized that calls for bloodshed is NOT protected speech.

This is hateful, violent rhetoric.

And it’s going to get people killed.