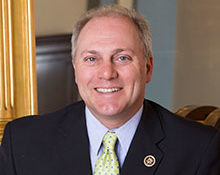 House Majority Whip Steve Scalise, a Republican congressman from Louisiana, and at least one other aide and two police officers were shot by a gunman with a “long rifle” who opened fire at a baseball practice in Virginia early Wednesday morning.

Sen. Jeff Flake reported the gunman had “a rifle of some sort” and “a lot of ammo.”

Capitol Police have reported the gunman is in custody.

Scalise confirmed he was shot in the hip and is undergoing surgery, but is “in good spirits and spoke to his wife by phone.”

The Alexandria police chief confirmed five people were taken to the hospital, but would not release their identities.

Scalise is a leading conservative on Capitol Hill and is considered one of the most popular and powerful lawmakers in Washington, D.C.

According to Sen. Mike Lee, a staffer used a belt as a tourniquet to stop Scalise’s bleeding, who was shot during infield baseball practice in the lead-up to the Congressional baseball game. Eyewitnesses have speculated that Scalise was deliberately targeted.

Reports say a wounded Capitol policeman, there as security for the congressmen, returned fire and “took down” the gunman. Between 50 and 60 shots were reportedly exchanged.

Sen. Rand Paul told Fox News that if the Capitol police had not been present it “would have been a massacre. We had no defense at all.”

“We were sitting ducks. We had no place to run,” Paul said. “It was a killing field.”

Rep. Ron Desantis and approximately a dozen other conservative lawmakers and staff were present at the shooting. Desantis told Fox News that an unidentified man approached him and colleagues as they were leaving and “walked up to us asking whether it was Republicans or Democrats out there.”

Desantis said he mentioned the incident to police, but couldn’t confirm if the encounter was with the gunman — but did mention that it “fits.” Ten minutes after, the shooting reportedly started.

Rep. Steve Scalise of Louisiana, a true friend and patriot, was badly injured but will fully recover. Our thoughts and prayers are with him.

The White House reportedly canceled Trump’s only public event scheduled for today, a visit to the Department of Labor, in light of the assassination attempt.

They also canceled a “listening session” on tax reform.

This story will be updated as information is released. Stay tuned to The Horn News for the latest on this rapidly developing story.