Game on! Trump SURGING in national polls - The Horn News 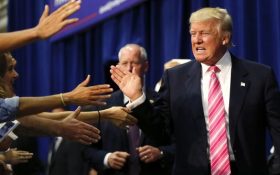 Headline after headline declared the race a blow-out. Journalists and news talking heads began citing major polls as evidence to their narrative that Trump and his supporters had no chance for victory in November.

One problem — no one told Trump.

Since, poll after poll are showing the race has returned to a virtual tie — and indicate that Clinton’s early August surge was little more than a post Democratic convention bounce, which observers note Trump also enjoyed following the RNC a week prior.

Since then, polls from Rasmussen Reports and UPI/CVoter have reported similar results — the race for the White House is back to a virtual tie.

And Republican National Committee chairman Reince Priebus is predicting that Trump could take the lead for good in national polls by Labor Day.

“I think what you are seeing on the campaign is a continuation of a good couple of weeks that Donald Trump has had,” he said on a conference call, noting the rapid maturation of the campaign efforts of the Trump campaign.

Priebus went on to predict Trump’s upcoming immigration speech as a noteworthy chance to convert voters to the GOP candidates side.

“I’m looking forward to those remarks, I know he is working on them and I think he is going to do what he said he’s going to do — he’s going to be fair, be tough, and be humane. Those are some pretty good principles for us to look to when dealing with this subject.”