[Report] Feds closing in on Clinton - The Horn News 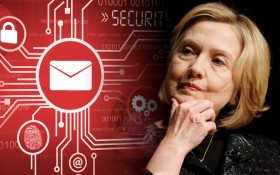 Infamous Romanian hacker Marcel Lehel Lazar, also known by his moniker ‘Guccifer,’ made a shocking admission during an interview yesterday.

Not only did he gain access to former Secretary of State Hillary Clinton’s home-brew email server repeatedly; he was one of nearly a dozen hackers who did so, and getting in was “easy.”

It was the strongest proof yet that Clinton’s email setup compromised national security. And experts say that Lazar’s admission, along with an immunity deal given to former Clinton IT specialist Bryan Pagliano, mean the FBI may now have the proof it needs to recommend criminal charges against Clinton.

“For me, it was easy … easy for me, for everybody,” Lazar said in an interview with Fox News from the Virginia jail he is being held at on other hacking charges.

In the midst of an intense presidential race, the admission could spell big trouble for Clinton. Lazar has openly expressed his eagerness to cooperate with the Clinton investigation, and if Lazar can prove that potentially dozens of foreign nationals accessed the data because of Clinton’s negligence, it could lead to an indictment of the Democratic presidential frontrunner.

An Internet Protocol (IP) is a unique numeric code, like a phone number or home address, that identifies the location of the computer behind it.

“Then I scanned with an IP scanner,” Lazar said, using easily accessible computer programs to test if the server behind the IP was “alive.”

According to Fox News’ report, Lazar came across evidence that he wasn’t the only one who had broken into the Clinton server.

Lazar claims he saw evidence of approximately 10 individuals accessing Clinton’s server from all over the world.

The Associated Press reported in October 2015, “Clinton’s private email server, which stored some 55,000 pages of emails from her time as secretary of state, was the subject of attempted cyberattacks originating in China, South Korea and Germany after she left office in early 2013, according to a congressional document.”

The Clinton campaign has repeatedly claimed that none of the classified data she’s accused of mishandling on her private email system was compromised, but Lazar’s claims have credibility.

In 2013, under his alias as ‘Guccifer,’ Lazar released to various news outlets multiple email exchanges between Blumenthal and Clinton, and they were first reported by the Smoking Gun.

The FBI is investigating whether national security was compromised by Clinton’s email arrangement.