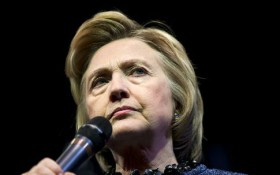 It is a joint fundraising committee made up of former Secretary of State Hillary Clinton’s presidential campaign, the Democratic National Committee and 32 state Democratic party committees.

It allows big money donors to drop huge $350,000 donation checks — far larger than what is allowed by federal law for a single candidate.

The campaign of Vermont Sen. Bernie Sanders has been raising a ruckus, trying to draw attention to the Victory Fund’s shady dealings.

Reportedly, wealthy donors make six-figure contribution checks to the Victory Fund, and then the money is routed to different places so it can eventually be used to support Clinton.

First, the money is transferred to state Democratic parties — and then it’s sent back to the Democratic National Committee, which will be able to use the cash to support Clinton once she wins the nomination.

In this way, Clinton is essentially getting around individual donor limits set by federal campaign law.

“The victory fund has transferred $3.8 million to the state parties, but almost all of that cash ($3.3 million, or 88 percent) was quickly transferred to the DNC, usually within a day or two,” POLITICO reported Monday.

The Victory Fund has also transferred millions directly to Clinton’s campaign and the DNC, which will cooperate closely with Clinton when she becomes the party’s nominee.

“Secretary Clinton has exploited the rules in ways that let her high-dollar donors like Alice Walton of Wal-Mart fame and the actor George Clooney and his super-rich Hollywood friends skirt legal limits on campaign contributions,” Sanders campaign manager Jeff Weaver said in a press release. “If Secretary Clinton can’t raise the funds needed to run in a competitive primary without resorting to laundering, how will she compete against Donald Trump in a general election?”

From Clinton’s Victory Fund, cash flowed into the DNC’s coffers in two ways: some comes directly from the fund itself and some first made stops at the state parties, and then got transferred to the DNC.

“Less than 1 percent of the $61 million raised by that effort has stayed in the state parties’ coffers,” according to POLITICO.

This isn’t the first time Clinton has been accused of money laundering schemes during this campaign. Just two weeks after Clinton said she would stop “the endless flow of secret, unaccountable money” in October of last year, the main super PAC backing her bid for the Democratic presidential nomination accepted a $1 million contribution that cannot be traced.

Those two groups are nonprofits that are not legally required to reveal information about their donors. Such contributions are sometimes called “dark money” by advocates for stricter campaign finance rules.

“This appears to be an out-and-out laundering operation designed to keep secret from the public the original source of the funds given to the super PAC, which is required to disclose its contributors,” said Fred Wertheimer, director of one such group, the Washington-based Democracy 21.