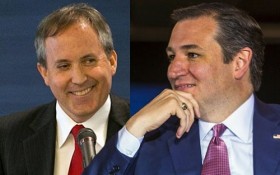 The integrity of Texas Sen. Ted Cruz has been questioned repeatedly on the campaign trail. In fact, his chief presidential rival Donald Trump has taken to calling him “Lyin’ Ted” at every opportunity.

And it doesn’t look like things are going to get any easier for the Cruz campaign.

Monday, federal securities regulators charged Texas Attorney General Ken Paxton — a political ally and friend of Cruz — with four counts of civil fraud. That piles on even more legal troubles for Paxton, who is already under criminal indictment for allegations that he deceived friends and wealthy investors — at least once with high-pressure tactics.

Cruz had campaigned for Paxton in his last election, appearing on stage at Paxton’s political rallies and referring to him as a “good friend” and “tireless conservative warrior.”

The lawsuit filed by the U.S. Securities and Exchange Commission provoked new calls from critics that Paxton should resign but no public response from state Republican leaders, including Gov. Greg Abbott. Cruz’s campaign has also been mum on the situation.

Paxton, who has pleaded not guilty to two felony counts of securities fraud handed up by a Texas grand jury last summer, has said he won’t step down and has faced no public pressure from state leaders to do so. But questions about his private financial dealings have made for a tumultuous first 16 months on the job.

The new federal lawsuit essentially mirrors the charges in Paxton’s criminal case — that in 2011 he defrauded investors in a high-tech startup called Servergy Inc., a data server company. But a new 26-page federal court filing provides a far more detailed narrative of Paxton’s alleged misdeeds than what has previously been made public.

The SEC describes how Paxton allegedly betrayed a friend, raised $840,000 and pressured one investor to make a “hasty decision” to immediately invest, thereby increasing the value of Servergy stock that Paxton received as commission. Paxton’s investor recruiting took when he was still a state legislator.

But both state prosecutors and now the SEC accuse Paxton of never telling investors Servergy paid him to raise money.

The investors wouldn’t have invested had they “known Paxton was being paid to promote the company,” the lawsuit reads.

Those same allegations led to Paxton’s indictment in his hometown and facing a possible sentence of five to 99 years in prison if convicted. By filing a civil lawsuit, federal regulators aren’t seeking prison time but instead want Paxton to pay back “any ill-gotten gains or unjust enrichment” and be ordered to pay additional financial penalties.

SEC investigators allege that one investor considered Paxton “a personal friend” and believed that Paxton was also investing in the company. According to the lawsuit, that investor “grew worried” when promises about product shipment failed to materialize, and that Paxton “did nothing” to determine whether those company milestones were true.

Paxton attorney Bill Mateja said he was surprised the SEC chose to file the charges a year after Paxton’s criminal indictment.

“Like the criminal matter, Mr. Paxton vehemently denies the allegations in the civil lawsuit and looks forward to not only all of the facts coming out, but also to establishing his innocence in both the civil and criminal matters,” Mateja said.

During a heated GOP primary race in 2014, Paxton admitted to breaking state securities laws by not disclosing how he received commissions for referring his private law clients to a financial planner. He paid a $1,000 fine, downplayed it as an oversight and went on to handily beat an establishment Republican who counted former President George W. Bush as a supporter.

A Dallas state appeals court is scheduled to take up the criminal indictments next month.