Clintons made millions in “criminal” deal - The Horn News 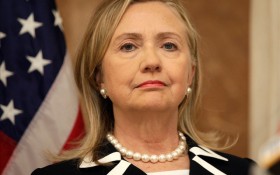 Did former President Bill Clinton and his wife, Democratic front runner Hillary Clinton, pocket nearly $3 million after a uranium deal with the Russians?

A lawsuit from Judicial Watch, a government transparency group, is aiming to find out.

Judicial Watch recently filed a lawsuit in federal court in the District of Columbia demanding to see communications between the U.S. Treasury Department and Hillary Clinton from her tenure as secretary of state.

Hillary Clinton has long been accused of using her position as secretary of state to push through a deal in which the Russian corporation Rostom acquired a uranium company, Uranium One, that owned and operated mines in the United States. Critics at the time were understandably nervous about turning over America’s uranium resources to the Russians, but the sale was quickly approved.

And, apparently, that’s when the cash started pouring in for the Clintons.

Shortly after the Russians announced their plans to acquire Uranium One, Bill Clinton received $500,000 for a speech in Russia from a bank with ties to the Kremlin.

And, as the New York Times previously reported, as Rostom’s acquisition of Uranium One went through, the chairman of Uranium One used his family foundation to steer $2.35 million to the Clinton Foundation.

Judicial Watch is seeking information on potentially damning email communications from the State Department, the Clinton family and foundation, and the Treasury Department surrounding the uranium deal.

“Hillary Clinton’s cash and secrecy on this Russian uranium deal looks corrupt and criminal,” said Judicial Watch President Tom Fitton, who said it appears the Obama administration and the Treasury Department are working to keep communications about the deal from coming to light.