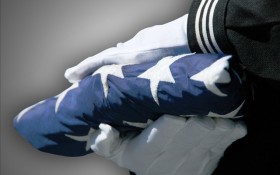 A suburban Indianapolis funeral home was packed by over 1,000 members of the public – many strangers- who came to honor a Marine Corps veteran with no known family.

Billy C. Aldridge died in October at the age of 80. WRTV-TV reports that nursing home records don’t include information about relatives and no one came forward to make arrangements.

That’s when Legacy Cremation & Funeral Services put out a call for all patriotic Americans to come give the hero veteran a dignified send-off.

The funeral service, which took place Tuesday at 10 a.m. at the funeral home in Lawrence, was reported to be so crowded it was standing-room only. The burial with military honors came at Memorial Park Cemetery.

Legacy used its Facebook page to encourage the public and veterans to attend.

Legacy Vice President Eddie Beagles says “giving this veteran who faithfully served his country a proper burial with military honors is the right thing to do.”