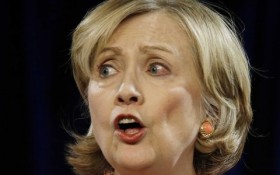 It looks like Democratic presidential candidate Hillary Clinton will be ringing in the New Year the way she usually does — mired in scandal.

Reports have surfaced that the State Department is planning to drop a New Year’s Eve bombshell by releasing thousands more emails from Clinton’s tenure as Secretary of State.

Under a Freedom of Information Act request, the State Department has until the end of the month to release the new batch of emails. Critics say the department is intentionally waiting until New Year’s Eve to draw as little media attention as possible to the emails.

But if history is any indicator, that will be easier said than done. Clinton’s use of a private email server has dogged her presidential campaign for months, and a federal intelligence review determined that she shared information that turned out to be classified.

It was also revealed earlier this month that the State Department’s top information security official had warned Clinton and her aides to stop using their Blackberry phones, citing their inability to protect sensitive information.

Clinton and her entourage reportedly ignored the warning.