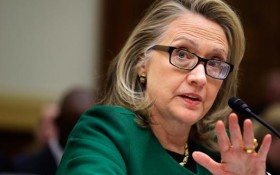 A newly released email proves that the United States military was ready to launch a rescue operation that could have saved American lives at the Benghazi diplomatic compound in 2012.

But the operation apparently needed the go-ahead from the Hillary Clinton-run State Department and the troops were not deployed on time.

The email, obtained by Judicial Watch in a Freedom of Information Act request, is likely to reignite heavy criticism of former Secretary of State Hillary Clinton’s inaction in the 2012 Benghazi terror attack that claimed the lives of four Americans.

And it raises questions about whether Clinton and other Obama Administration officials were telling the truth when they claimed they did everything in their power to protect American diplomats.

The email arrived at the State Department at 7:19 pm EST on September 11, 2012, just hours after the attacks began and before the compound was overrun. The sender, a State Department employee named Jeremy Bash, complained that during the crisis he was unable to get any of the agency’s top brass on the phone.

The message was sent to Clinton’s close team including Clinton’s Under Secretary of State for Political Affairs Wendy Sherman, Deputy Chief of Staff Jacob Sullivan, and Deputy Secretary of State Thomas Nides. It notifies the Clinton team of our troops’ ability to respond quickly, saying that U.S. forces were “spinning up” and ready to deploy in support of the Benghazi compound.

The email also asked Clinton’s State Department to clear any necessary approvals with the host nation of Libya before the rescue operation could begin.

And then nothing happened.

U.S. rescue teams were not deployed until several hours after the email was sent, after Ambassador Christopher Stevens and Sean Smith were already dead. The other two Americans were killed in a follow-up mortar attack that night at a nearby CIA compound.

The go-ahead response times for U.S. rescue teams has been heavily criticized in the past, and this email may show that blame of the delay rests on Clinton and her State Department team.

Previously, an independent review convened after the attacks deeply faulted State Department officials in Washington for their poor communication and cooperation as diplomats in Libya warned that Benghazi was growing more and more dangerous.

The Accountability Review Board cited a “lack of transparency, responsiveness, and leadership at senior bureau levels” and “shortfalls in Washington coordination” contributing to a “woefully insufficient” security force at the compound.

The fewer than half-dozen armed diplomatic security personnel at the compound “were not well served by their leadership in Washington,” the board said.

The email can be ready in it’s entirety here.