Chelsea Clinton is running for Congress - The Horn News 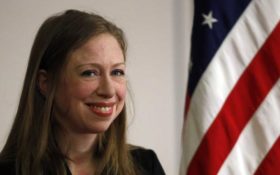 The Clinton machine may be back on the capitol in 2020 — but it won’t be former Secretary of State Hillary Clinton.

It would be former first daughter Chelsea Clinton, who is reportedly eyeing the 17th congressional district in New York.

In fact, The Horn News reported that Chelsea has been prepared for this exact scenario since Dec. 2016.

The 17th congressional district belongs to Rep. Nita Lowey, D-N.Y., a top Democratic insider and longtime ally of House Speaker Nancy Pelosi, D-Calif. But the 82-year-old Lowey announced this week that she won’t run again in 2020.

Lowey announced Thursday that she would retire at the end of the current term — and the power dealers in the Democratic Party wasted no time offering the position to Chelsea.

In recent years, Chelsea has repeatedly hinted that she was interested in public office.

She said in an interview in 2018 that “if someone were to step down or retire and I thought I could do a good job and it matched my talents, I’d have to think if it’s the right choice for me.”

The 17th district includes the wealthy suburb that Hillary and Bill Clinton currently live in, as it is considered a Democratic stronghold in the state.

There are currently two other Democrats that have announced their intention to fill the soon-to-be-vacant congressional seat, but if Chelsea is successfully recruited by party insiders she’d quickly become the clear front-runner.

“If you’re a Clinton and you need a hook, this is a good one,” the source reportedly The Daily News.

Or should the former first daughter keep her day job?