Chelsea Clinton furious over this picture (it's going viral!) - The Horn News 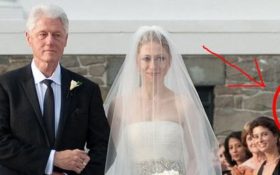 The arrest of billionaire Jeffery Epstein this weekend has many rich and powerful people around the world concerned.

Over her left arm — directly on the aisle as one of the Clinton family’s most honored guests — is Ghislaine Maxwell.

“Though Epstein is the only person [arrested so far], many powerful people with ties to the 66-year-old are likely feeling a little nervous about the consequences of the billionaire’s arrest — including Ghislaine Maxwell, a confidante of Epstein’s who has been connected to him for more than two decades and is alleged to have played a critical role in recruiting and grooming underage girls into his sex-trafficking ring,” New York Magazine reported Monday.

“Epstein intentionally sought out minors and knew that many of his victims were in fact under the age of 18,” prosecutors told reporters when announcing Epstein’s latest arrest. The New York billionaire also allegedly paid some of his victims to “recruit additional girls to be similarly abused.”

According to reports, Maxwell is the madam that helped Epstein and his friends groom these underage women for sexual abuse.

She was invited by the Clinton’s to their daughter’s wedding, despite her role being public knowledge after Epstein’s conviction two years beforehand.

Of course, this isn’t the only controversial part of Chelsea’s wedding album.

For years, rumors have circulated that her $3 million dollar wedding was, at least in part, paid for by misappropriated funds from The Clinton Foundation.

Millions in donations given to the Foundation for their Haitian earthquake relief efforts were allegedly funneled to Chelsea to pay for the extravagant wedding and her dress. Court documents show Epstein is a co-founder of the Foundation.

The Clinton family has repeatedly denied the accusation that any Clinton Foundation donations were used to fund their daughter’s wedding. A family spokesman also released a statement denying knowledge of Epstein’s deviant sexual behavior on Monday —

According to reports by Fox News, at least part of the former president’s statement is a verified lie.

Flight logs, obtained by the cable news outlet in 2015, prove the former president took at least 26 trips between 2001 and 2003 aboard Epstein’s private jet, nicknamed the “Lolita Express.”

That “included extended junkets around the world with Epstein and fellow passengers identified on manifests by their initials or first names, including ‘Tatiana,’” Fox News reported.