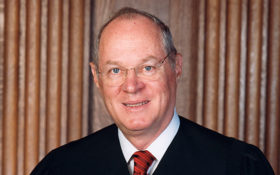 The 81-year-old Kennedy said he is stepping down after more than 30 years on the court.

In March, The Horn News wrote that Kennedy was set to retire in approximately 99 days.

As a Republican appointee, he has held the key vote on such high-profile issues as abortion, affirmative action, gay rights, guns, campaign finance and voting rights.

Without him, the court will be split between four liberal justices who were appointed by Democratic presidents and four conservatives who were named by Republicans.

Trump’s nominee is likely to give the conservatives a solid majority and will face a Senate process in which Republicans hold the slimmest majority, but Democrats can’t delay confirmation.