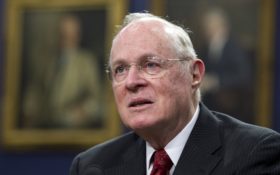 President Donald Trump might soon get the chance to cement his judicial legacy by appointing his second Supreme Court justice as early as this summer.

Talk is heating up that Justice Anthony Kennedy, a conservative judge that turns 82 in July, could retire as early as next month.

“Kennedy is going to retire around sometime early summer,” Nevada Sen. Dean Heller, a Republican, said earlier this year. “I think a new Supreme Court justice will get them motivated.”

Evidence suggests that prediction will be coming true. Court-watchers are trying to read the tea leaves, and many believe that the light load so far for next term could be a sign the justices are setting up for an uncertain autumn.

“One possibility is they are not granting cases because they don’t know who their ninth member is going to be,” Ian Samuel, a Climenko fellow and lecturer on law at Harvard Law School, told The Hill. “You could imagine Kennedy telling the chief, ‘I’d like to keep this between us, but I’d like to retire,’ and the chief saying, ‘Let’s see who Kennedy’s replacement is before we grant all these cases.’”

Indeed, if Kennedy – the last of former President Ronald Reagan’s appointees still in the court – wants to replaced by another conservative judge, retiring just before the midterms with the Senate safely in GOP hands makes sense.

Kennedy is often the swing vote on 5-4 decisions. While his permissive position on social issues such as gay marriage has drawn ire from the right, he has been a solid conservative vote on other key issues such as limiting the role of government.

He voted against Obamacare, for example.

But his retirement could pave the way for Trump to appoint a much more reliable and consistent conservative vote.

That prospect has leftists already losing their collective mind.

“How can we put this the right way? Please don’t go,” The New York Times Editorial Board begged last month. “If Mr. Trump gets the chance to fill your seat, it will be the most conservative court in nearly a century.”

That’s a prospect that has right-leaning voters cheering.

Trump’s pick last year of Neil Gorsuch was a signal to conservatives that had been hesitant about his presidency that the legal system was in safe hands.

Others even saw it specifically as a signal to Kennedy: Retire now and the seat will go to an intellectual conservative legal mind.

After all, Gorsuch was once Kennedy’s clerk!

But he and Gorusch haven’t gotten off to a fast start. They are often at odds with each other and, in divided cases during the last term, fully agreed just 38 percent of the time according to SCOTUS Blog.

In a sign of just how much Kennedy defies convention, he had the most agreement with conservative Chief Justice John Roberts at 82 percent followed by the very liberal Elena Kagan at 74 percent.

Even his disagreements were split: He was most likely to completely disagree with the conservative Clarence Thomas (54 percent of the time in split rulings) and the leftist judge Ruth Bader Ginsburg (46 percent).

In other words, if there’s a consistent message in his rulings, it’s hard to spot.

But that hasn’t stopped the predictions market from heating up.

“It’s entirely possible that Kennedy says on the last day, ‘Peace. I’m out,’” Josh Blackman, an associate professor of law at the South Texas College of Law in Houston

Others think that’s unlikely, and note that he has hired law clerks for the next term.

“I wouldn’t be surprised if he remains on the bench,” Christine Kexel Chabot, who teaches at Loyola University Chicago School of Law, told The New York Times.

One thing is certain: If Kennedy does quit and his replacement isn’t appointed immediately, this autumn’s midterm elections could put more than the balance of power in Congress on the line.

The future of the Supreme Court will be at stake, too.