Supreme Court justice to retire in 99 days - The Horn News 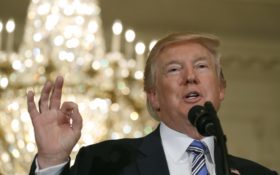 When President Donald Trump took office, he told supporters he planned to nominate four judges to the Supreme Court during his first term in office — a plan to would give conservatives a stronghold on the high court for generations.

To much fanfare, Trump has already made good on his “one judge a year” plan when Justice Neil Gorsuch was sworn in last year. This year, the plan is for Justice Anthony Kennedy to retire in early summer — which starts in just 99 days.

That’s according to Nevada Sen. Dean Heller, a Republican, who strongly implied that Kennedy will announce his retirement in a few months.

Of course, this isn’t the first time Kennedy has hinted he would retire under Trump so he can be replaced with a strong conservative.

But an announcement this year by Kennedy is just the thing conservatives have been hoping for.

Kennedy has been the crucial swing vote on the high court for more than a decade, and sided with the liberal justices on gay and abortion rights, as well as some the death penalty and the rights of suspects detained at Guantanamo Bay naval base.

His retirement would lockup the court with a decidedly conservative majority for decades.

Trump has also quietly floated the idea of replacing a physically ailing Ruth Bader Ginsberg, a liberal judge who he noted is increasingly frail. “What does she weigh? 60 pounds?” Trump reportedly asked advisers when sculpting a list of potential Supreme Court nominees.

Trump has also targeted Justice Sonia Sotomayor for potential replacement during his tenure, reportedly questioning her health because of her struggles with diabetes.

Do you want Trump to nominate three more Supreme Court justices during his first term?