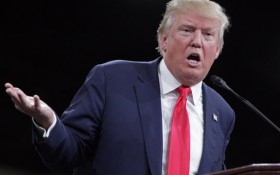 They’re worried his plan to close tax loopholes could cost them millions. They say he’s creating instability that could shake up the stock markets.

And now some of the richest people in the world are joining forces to keep Donald Trump out of the White House.

It’s not just Trump’s politics that terrify Wall Street. They’ve never seen a candidate like him before.

For years wealthy backers have been able to use campaign donations to wield massive influence with presidential candidates. But with Trump largely self-financing his campaign, he’s become impossible to control.

“Trump has never really been part of the New York City business community” and is “really a lone wolf,” she said.

That is making some very rich people nervous enough to cough up a fortune and plot strategies to back Trump opponents.

One of the topics was reportedly how to stop Trump. And they’re not alone.

Many of America’s richest citizens are trying to stop him the old-fashioned way – with money.

Hedge fund managers are poised to double the amount of money they will sink into this presidential campaign over 2012. The wealthiest of them have already spent $47 million, according to Reuters.

One of the top donors is a familiar name: George Soros. The Hungarian-born speculator has donated more than $8 million in 2016, all to liberal PACs backing Hillary Clinton, according to FEC records.

Sen. Ted Cruz has scooped up $11 million from just one hedge fund manager, Robert Mercer of Renaissance Technologies, and has close ties to the banking world through his wife, Heidi, who works at Goldman Sachs.

While the financial elite may support different candidates, they all agree on one thing: They hate Donald Trump.

One anti-Trump super PAC financed by the billionaire Ricketts family of Chicago has spent $3.5 million on ads in Florida in the last two weeks and plans to spend $1 million in Ohio and $2 million in Illinois this month.

In large part they’re opposition is because Trump’s economic plan could cost them money. Lots of money.

Hedge fund managers arrange their business dealings so they pay a lower tax rate than people who earn their money from salaries – something opponents call the “carried interest loophole.” Trump would close it.

Trump’s tax plan singles out “speculative partnerships” like hedge funds, because they “do not grow businesses or create jobs and are not risking their own capital.” He has called them “paper-pushers.”

And they have plenty to lose. Institutional Investor’s Alpha reported that the top 25 hedge fund managers made $11.62 billion in 2015. That’s $211,538 an hour, or as much as 220,000 average families combined, according to MarketWatch.

Raising taxes on any sector is controversial among many Republicans, and some defend hedge funds. Overall, Trump’s economic plan would slash taxes on the middle class and fight to protect high-paying manufacturing jobs, while raising taxes on Wall Street speculation.

As The Horn News reported, Trump told a town hall event in South Carolina his plan is “going to make people happy, other than maybe the hedge fund guys who make hundreds of millions of dollars and pay very little tax.”

“I think they’re all going to be my enemies,” he predicted.