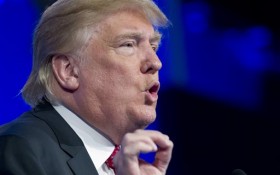 Republican presidential front-runner Donald Trump is set to roll out his new tax plan today — and he’s already predicting that some of the GOP’s wealthiest backers are going to be very unhappy.

It’s a plan the billionaire businessman has been touting for weeks as he’s come under increased scrutiny for failing to outline specific policy platforms as he’s risen to the top of GOP polls.

Trump’s proposed tax overhaul is expected to have plenty for the Republican faithful to like, such as a tax cut for middle-class Americans and corporations.

Trump is expected to take aim at groups like hedge fund managers he has long complained don’t pay enough. He would propose to change this, for instance, by eliminating the so-called “carried interest loophole” that allows managers of hedge funds and private equity firms to pay a lower tax rate than most individuals. That could amount to a massive tax hike on a group that often supports Republican candidates.

“I think it’s going to be a plan that’s going to make people happy, other than maybe the hedge fund guys who make hundreds of millions of dollars and pay very little tax,” Trump said during a recent town hall event in Columbia, South Carolina, adding: “I think they’re all going to be my enemies.”

He said Sunday the plan would be revenue neutral, or bring in more money, and pushed back against the idea that he was breaking with the Republican Party by calling for higher rates for some wealthy earners.

Trump added that the plan would include eliminating income taxes altogether for people at the lower end of the income spectrum.

“There will be a large segment of our country that will have a zero rate,” he said in the interview.

“I’m a pretty good Republican. But I will tell you this, I do have some differences,” he said. “I don’t want to have certain people on Wall Street getting away with paying no tax.”

The real estate mogul has proposed a variety of tax overhauls over the years, including some that have raised eyebrows from groups like the tax-cutting advocacy group Club for Growth.

In his 2001 book “The America We Deserve,” Trump proposed a one-time, 14.25 percent tax on individuals and trusts with a net worth over $10 million — a plan he claimed would bring in $5.7 trillion in new revenue, which he said would be enough to pay off the entire national debt. (The actual debt currently stands at more than $18 trillion.)

“Some will say that my plan is unfair to the extremely wealthy,” he wrote then. “I say it is only reasonable to shift the burden to those most able to pay.”