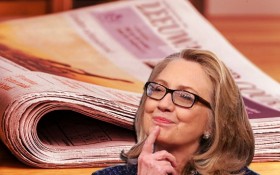 If Hillary Clinton is going to get by, it’s going to be with a little help from her friends in the media — even if it’s illegal.

The Clintons are known for their reliable network of hardcore supporters, including many who hold positions of power in the mainstream media – and you can bet they’re doing everything they can to ensure her nomination.

But if that weren’t enough to control the whole message, the Clinton campaign has taken it one step further. A longtime Clintonista has reportedly bought up a popular liberal political news website called Blue Nation Review, and according to a recent report from The Huffington Post he quickly moved to fire anyone at the organization not pro-Hillary.

Now critics are saying the messaging may cross the legal line between super PAC and political campaign.

The bold move is likely a result of Clinton’s growing rivalry with Vermont Sen. Bernie Sanders, and her inability to connect with young voters. The younger crowd doesn’t get its news from CNN, Fox or the local daily newspaper.

They get it from left-wing “news” sites such as the Blue Nation Review.

So, why not just control the source? In November, the political site was purchased by David Brock – the once-conservative reporter who renounced his views in the 90s, moved to the left and is now so tight with the Clintons that he founded one Hillary super PAC, the American Bridge 21st Century, and currently runs another, Correct the Record.

Brock’s organizations have gone hard after Sanders, going as far as to compare him to deceased Venezuelan leader Hugo Chavez, a socialist who made no secret of his admiration for Fidel Castro… and his disdain for the United States.

Super PACs are legally forbidden from coordinating with a candidate, but Brock’s organization has been openly flouting that rule and actively coordinating with the Clinton campaign, and is claiming they have an “Internet Exemption.”

That one is likely to go to court at some point, but for now they are working with the Clinton campaign in getting her message out to young voters via the Internet. And now Clinton can expect to rely on Blue Nation Review to spread pro-Clinton propaganda.

This isn’t Clinton’s first run at this type of blatant media control. Brock also runs another site the left relies on, one called Media Matters for America, which wastes much of its bandwidth peddling Clinton’s “vast right-wing conspiracy” fairy tale.

Never mind that the mainstream media has been cheerleading so openly for a Clinton presidency that it’s practically an arm of her campaign.

For example, in early 2015 stories surfaced of mainstream media journalists giving Clinton a standing ovation after she had rebuked one reporter’s attempt to question her on the newly-broken email scandal.

Any reporters that won’t play ball will find themselves under fire, say Clinton campaign supporters.

Specifically, Clinton “super volunteers” issued a warning to New York Times reporter Amy Chozick last year, telling her that, “We will be watching, reading, listening and protesting coded sexism…” in all media pieces. The group demanded that using words to describe Clinton as, “polarizing, calculating, disingenuous, insincere, ambitious, inevitable, entitled, over confident” and “will do anything to win” were off limits for journalists.

While Blue Nation Review was already openly advocating for Clinton, having both sites under the same control as Clinton’s super PAC ensures that two websites widely visited by young voters push a focused message – and that message is loud and clear: Vote for Hillary.