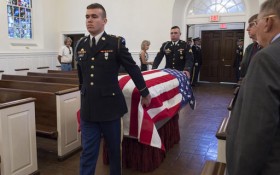 For nearly six decades, she was the wife of a famed military aviator. Nobody knew she was a hero in her own right, a spy who reported on Soviet troop movements from behind what came to be called the Iron Curtain.

Now Stephanie Czech Rader is finally being recognized for her work.

Rader received the Legion of Merit on Wednesday. It was awarded posthumously, during funeral services with full military honors at Arlington National Cemetery. She died in January at the age of 100, a longtime resident of Alexandria and native of Poughkeepsie, New York. 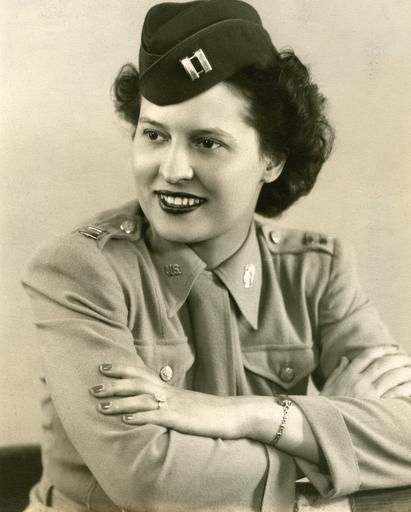 In this 1940’s photo provided by the OSS Society, U.S. Army Capt. Stephanie Rader poses for a photograph. (OSS Society via AP)

Rader worked for the Office of Strategic Services, a forerunner of the CIA.

The daughter of Polish immigrants, her fluent Polish caught the attention of the OSS. The office recruited her from her job with the Women’s Auxiliary Air Corps and put her in Poland from October 1945 to February 1946.

She was employed as a clerk at the U.S. embassy in Warsaw, but her real job was to report on Soviet troop movements. She traveled the countryside on her own. Her bosses offered her a gun for protection but she refused it, saying “What was I going to do with a dumb gun?” according to Charles Pinck, president of The OSS Society in Falls Church. Carrying a gun, after all, could blow her cover.

In January 1946, Pinck said, Rader was carrying sensitive documents when she was arrested by Polish security, but she was able to dispose of the compromising papers before she was taken into custody. She remained under 24-hour surveillance for the rest of her tour, Pinck said.

Her bosses recommended her for the Legion of Merit in 1946, but the recommendation was never acted upon — perhaps because she was a woman, and perhaps because the OSS soon dissolved and there was no organization to advocate for her.

Pinck said OSS was ahead of its time in employing women. About a third of the 13,000 people who served in the OSS were women, he said. He estimated that OSS veterans still alive number only in the hundreds now.

Rader served in the OSS under her maiden name, Stephanie Czech, but went on to marry William S. Rader, a decorated World War II bombing commander who became an Air Force brigadier general and himself received the Legion of Merit. They had been married for 57 years when he died in 2003.

In 2008, when records of the OSS were declassified, The OSS Society and other historians learned of Rader’s work and began to lobby for her to receive the award. Sen. Mark Warner, D-Virginia, also took up her cause, and last week the Army announced that Rader would receive the award posthumously.

For years, her family knew nothing of her spy craft. Niece Kathy Roxby of Santa Barbara, California, said she didn’t learn her aunt had been a spy until Rader’s 100th birthday, well after her service had been declassified.

“She said she was supposed to keep it a secret,” Roxby said.

Another niece, Linda Hobbs of Charleston, South Carolina, said that while the revelations about Rader were a surprise, it makes sense in retrospect.

“She was tough, let me tell you. As a kid, I was a little scared of her,” Hobbs said.

Despite Rader’s best efforts, she wasn’t able to keep her secret from everyone. The Raders became good friends and business partners with Ken and Judie Elder, often traveling together. Once, about 30 years ago, they traveled to Poland together, Ken Elder recalled Wednesday. As they toured the old town square in Warsaw, she told a story about Eisenhower touring the rubble in the immediate aftermath of the war.

The next day, on a guided tour, the tour guide talked about some of the exact same things, casually mentioning that few people remembered the details of Eisenhower’s visit.

That piqued Elder’s curiosity, and he started questioning Rader about the source of her knowledge. He eventually asked: “Were you a spy?”

“I guess that might be what you call it,” she replied.