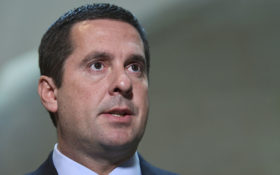 President Donald Trump has called on Republicans to “fight tough” against the Democrat-led impeachment inquiry — and Rep. Devin Nunes, R-Calif., may have just answered that call.

Nunes may have discovered a bombshell loophole that could kill the entire impeachment inquiry.

Rep. Adam Schiff, D-Calif., and Democrats in the House have used legal technicalities to keep Republican-picked witnesses from the stands.

Schiff only wants the American people to hear what Democrats want.

Nunes revealed Thursday that Schiff made a mistake — and the Democrats didn’t close a special loophole.

And it may allow the Republican minority to call neutral witnesses — one without an agenda — to the stands.

Nunes has invoked an obscure House rule that Schiff reportedly overlooked, to call for a second, Republican-led “impeachment inquiry” hearing… one where Nunes and his allies would be calling the witnesses.

If Schiff fails to call the hearing as requested, Nunes says it will be seen as “evidence of your denial of fundamental fairness and due process” by the American people.

The letter can be read here —

On September 24, 2019, Speaker Nancy Pelosi unilaterally announced that the House of Representatives would initiate an inquiry into impeaching President Donald J. Trump. Although Speaker Pelosi promised that Democrats would “treat the President with fairness,” you have repeatedly prevented Republicans from fully and fairly examining issues central to the Democrat’s “impeachment inquiry.” Therefore, pursuant to House Rule XI, Clause 2(j)(1), we, the undersigned Republican Members of the Permanent Select Committee on Intelligence, exercise our right to convene a hearing with witnesses selected by the Minority to testify in the Democrats’ “impeachment inquiry.”

As the Committee continues to conduct the Democrats’ partisan and one-sided “impeachment inquiry,” there are still important perspectives and serious issues that you have prevented the Committee from examining. We will inform you of the witnesses we intend to call once you have provided a hearing date and time of which we agree. Your failure to schedule this hearing shall constitute evidence of your denial of fundamental fairness and due process.

It was signed by Nunes, as well as a large contingent of Republican reps.

McCarthy asked the American people to share it and demand Schiff’s answer.

Chairman Adam Schiff has repeatedly denied fundamental fairness and due process throughout the course of this sham impeachment.

RT if you agree that he should stop blocking important witnesses from testifying. pic.twitter.com/TyFWxpzFwm