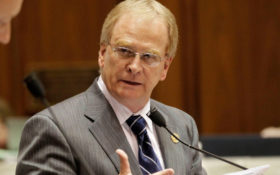 The mayor’s office at city hall in Muncie, Ind. didn’t open up as scheduled at 9 a.m. Monday.

“Out to lunch,” a sign on the door read.

But there was no lunch at all.

Tyler received a brutal wake-up call at his home on Monday morning, the Muncie Star Press reports, after FBI agents raided his home.

Tyler, at the center of a four-year-long FBI probe, was handcuffed at 7:30am.

Christine Bavender, a spokesperson for the FBI, confirmed the arrest to the Muncie-based newspaper. “I can confirm an arrest warrant was executed at the home of Mayor Dennis Tyler this morning and he is currently in custody.”

Tyler had been under investigation since 2016 for corruption, according to The Star Press.

His arrest is just the latest in a slew of other connected associates in the federal corruption probe.

As for Tyler, his final term as Muncie mayor is over at the end of this year.

Prior to his arrest, he announced he would not seek reelection. He faces