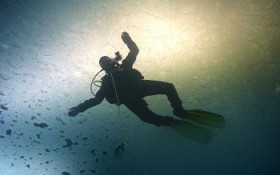 The Russian Geographical Society says two of its explorers have achieved the deepest dive ever recorded below ice.

The organization said the dive to 102 meters (335 feet) took place Saturday in the White Sea, an arm of the Barents Sea. They said divers spent 80 minutes in waters with an average temperature of minus 1.5 degrees Celsius (29.3-degree Fahrenheit).

Video footage provided by the society showed the divers lowering themselves through a large triangular opening chopped in the ice.

After they emerged, faces red from the cold, diver Alexander Gubin declared it was “great to see life at such a depth.”

Russian divers have claimed a series of record depths in sub-zero dives in Arctic and Antarctic waters. Saturday’s feat was documented by officials from the World Underwater Federation.