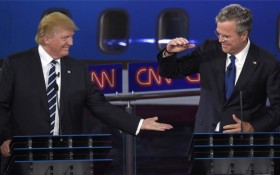 Jeb Bush says he misjudged the intensity of anger among Republican voters before his White House campaign and believes the country in 2016 is “dramatically different” than in past elections. Yet he insists he’s still a viable candidate, and one who has broadened his mission to include defending conservativism from GOP front-runner Donald Trump.

In particular, Bush reaffirmed his commitment to conservative social issues in an AP Conversation, the latest in a series of extended interviews with the candidates to become the nation’s 45th president.

The former Florida governor spoke to the AP in Iowa, where he argued the Supreme Court should overturn its landmark Roe v. Wade ruling affirming abortion rights and, as he has for weeks, pummeled Trump incessantly.

But as the state’s leadoff Feb. 1 caucuses draw closer, the man once thought to be the Republican Party’s most likely nominee, shows few signs of momentum. Bush is favored by just 4 percent of likely caucus-goers in the respected Iowa Poll, published Wednesday by The Des Moines Register and Bloomberg News, down two points in the past month and mired in sixth place.

To be sure, Bush isn’t giving up. Yet, rather than talking about winning in the early voting states, Bush says he’s working to “beat expectations” in the February contests before moving into March as “a candidate that’s viable.”

“After that, the fur starts flying pretty quick,” he said. “We’ll be viable.”

The son of one president and brother of another, Bush told AP this week he was never comfortable with his place as the early favorite for the GOP nomination. He effectively blocked 2012 GOP nominee Mitt Romney from entering the race, winning over many of Romney’s donors en route to raising more than $100 million last year to support his bid.

But that political pedigree and fundraising prowess scared no campaign rivals, least of all Trump, who got into the race the day after Bush in June. Bush told AP he failed to predict Trump’s popularity, reflected in the real estate mogul’s sustained lead among GOP voters in preference polls and the large, raucous crowds he draws to his rallies.

Bush continued, “So, in recognition of that, what I want to do is make sure that the conservative cause is advanced. Not just in talk shows and think-tanks and wherever conservatism is talked about in all sorts of different ways, but in governing.”

Bush’s vow to champion conservative principles to counter Trump’s rise came hours before President Barack Obama condemned “voices urging us to fall back into tribes, to scapegoat fellow citizens who don’t look like us, or pray like us, or vote like we do, or share the same background,” in his final State of the Union address.

That thinly veiled reference to Trump, who has made building a wall on the U.S. southern border and barring Muslims from entering the United States the cornerstones of his campaign, was echoed moments later by South Carolina’s Republican governor, Nikki Haley. In delivering the official Republican response to Obama’s speech, she called on voters to tune out “the siren call of the angriest voices.”

It’s a message Bush has carried forward for weeks, predicting a moment when Republican primary voters would start to see Trump as more showman than statesman and begin to favor an experienced leader in uncertain economic times and perilous ones overseas.

When asked to describe Bush, the majority of three dozen people taking part in a recent GOP focus group led by Republican pollster Frank Luntz used words such as “weak,” ”irrelevant,” and “loser.” Only a few said “experienced.” At one point, Luntz even apologized to a Bush staffer watching the panel from behind one-way glass.

“He’s the wrong guy at the wrong time,” Luntz said. “If this had been four years ago, he’d be president.”

As Bush’s campaign and well-funded super PAC search for a spark, he has more recently seized on Trump’s past contributions to Democrats, moderate social positions and public praise of Democratic front-runner Hillary Clinton to show he’s a charlatan whom others are too meek to take on.

“The pursuit of that, of protecting the conservative cause, it’s being hijacked by Donald Trump, who’s not a conservative,” Bush said. “And others are cautious about expressing this, because God forbid you get into a Twitter war with a guy who has a lot of free time on his hands, I guess.”

Trump’s rise and Bush’s underwhelming showings in the Republican debates raised concern among some Bush donors in the fall. Bush has since poured his energy into policy proposals, especially on confronting the Islamic State group, and redoubling his effort in New Hampshire.

Bush says his case to voters is backed by eight years as a “reform-minded” governor in Florida. He served in Tallahassee from 1999 to 2007, and in those years consistently staked out positions aimed at curbing abortion— something he would do again if elected president, he said.

“I’d like to see Roe v. Wade overturned,” Bush said. Should the Supreme Court overturn the 1973 decision, Bush said states would be empowered to decide the fate of abortion, “which is the proper place for its regulation.”

Bush promised to work with Congress to strip federal money from Planned Parenthood, the nation’s largest abortion provider, promote adoption programs and expand “crisis pregnancy centers,” which Florida began financing when he was governor. “There’s a lot that can be done to protect life across the board,” Bush said.

Bush said he would not base judicial appointments on the abortion-rights positions of his nominees but rather scour their records to find conservatives who are consistent in their overall judicial philosophy.

Bush isn’t often asked about his position on abortion while campaigning in New Hampshire. Voters in the state, which holds the nation’s first primary election Feb. 9, tend to be more concerned about the economy, federal spending and military and foreign policy issues than about social issues.

Speaking to 300 voters in New Hampshire last week, Bush said a country “where everybody is in pursuit of their own dreams” is an aspiration worth fighting for, and “I intend to fight until the bitter end.”

In his interview with AP, Bush dismissed the suggestion that the comment was an acknowledgment that things looked bleak for his campaign.

“I never thought it would be easy,” he said.