Why does Wall Street love Ted Cruz? - The Horn News 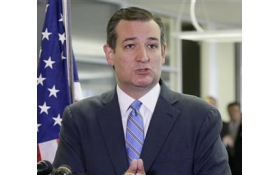 Questions on Cruz’s reliance on Wall Street come after reports that Cruz’s campaign has received over 18% of it’s funding from the financial industry, according to the Center for Responsive Politics, a Federal Election Commission

Some $22 million in donations have come in from bankers.

But according to Cruz defenders, that’s not a conflict of interest. Many wealthy donors support Cruz’s proposed tax plan, according to The Wall Street Journal, and see it as highly beneficial to both their businesses and their personal finances.

Recently, Cruz picked up the backing of a big Texas billionaire, his campaign reported.

Darwin Deason, a technology entrepreneur, and his son, Doug, had given millions of dollars to the 2016 efforts of former Texas Gov. Rick Perry, who ended his bid for the White House last month.

Cruz called his own fundraising “astonishing” and said it’s “positively nuts” that he’s in some ways in a stronger financial position than Bush.

“There are some other campaigns that have a lot of high-dollar donors and bundlers, but not much grassroots support,” he said, speaking just a few miles away from where the Bush family was rallying around Jeb Bush at an event for his donors.

Earlier this year, Darwin Deason poured $5 million into pro-Perry super PACs — making him one of the biggest contributors in presidential politics. After Perry’s withdrawal from the race, the super PACs returned much of that money.

Cruz also has super PACs working on his behalf. Those groups can take unlimited amounts from donors, while the campaigns themselves cannot accept contribution checks from each donor of more than $2,700 per election.

When super PACs are factored into the mix, Cruz’s fundraising is second only to candidate Jeb Bush’s in the GOP field. Together, the pro-Cruz groups had raised at least $64 million by the end of September, fundraising documents show.

The Deasons are marquee names for Cruz, but he has quietly consolidated the support of many former donors to Perry and another 2016 dropout, Wisconsin Gov. Scott Walker. The Cruz campaign added five other former Perry backers to its finance team, officials said on Monday.